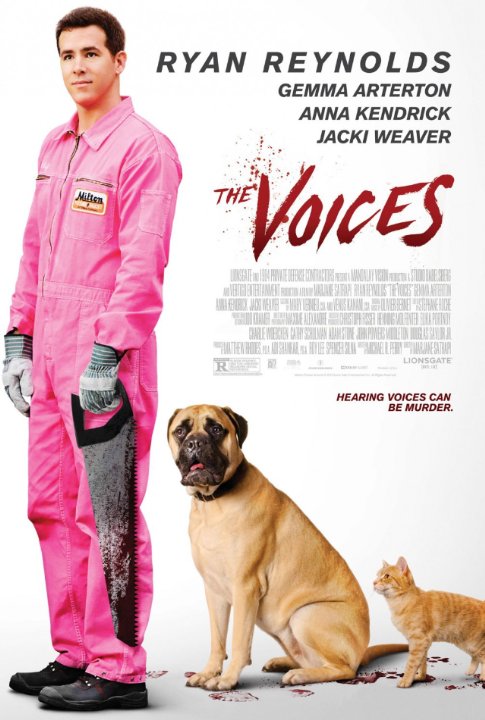 Plot: Jerry is a likeable bachelor living in a seemingly normal apartment along with his dog, Bosco, and his cat, Mr. Whiskers. But under his innocent facade lies the minds of killer - thanks to the advice he gets from his evil cat, even while his benevolent dog tries to steer him right. -- Chris Kavan

'The Voices' is undoubtedly the most original film I've seen this year. This darkly comedic serial killer story does something that very few movies can ever manage. It makes the murderous main character understandable and sympathetic, while not once condoning his crimes. He's likable and unpredictable in his attempts to be normalized. Short doctor visits and childhood flashbacks give just enough of a reasoning behind the voices. Those voices provide most of the clever laughs. The odd cheeriness to the interactions with other characters is also very amusing. That comedy actually balances out with the saddened repercussions of the killings. Those crucial moments are taken seriously and handled with suspense. All of these aspects somehow gel into a cohesive tone. I was impressed …

Who would have thought that a film starring Ryan Reynolds as a serial killer could be so disturbing yet so darkly humorous. I was dubious as to whether it could be done, but I was impressed by how a movie featuring a talking dog, cat and various severed heads worked so well.

We meet Jerry (Reynolds) on the job, working in a factory that ships bathtubs. He seems like a mostly well-adjusted, slightly awkward guy. He gets corralled into helping plan the company picnic (for being the "new guy") but we soon find out he may not be a steady as we first think. He's seeing a psychologist (Jacki Weaver) and it's obvious that the only thing keeping him on the straight and narrow is a daily regimen of pills. When he doesn't take his pills his cat, Mr. Whiskers (Reynolds - sporting a Scottish …

Who every thought that a movie starring Ryan Reynolds where he talks to his pets like Doctor Dolittle that tell him to kill people would actually make a pretty damn enjoyable film.

The story is about are main character Jerry who is a likeable bachelor living in a seemingly normal apartment along with his dog, Bosco, and his cat, Mr. Whiskers. But under his innocent facade lies the minds of killer - thanks to the advice he gets from his evil cat, even while his benevolent dog tries to steer him right.

I don't think I'm the only one who thought this movie was going to bad and extremely laughable, I mean look at the plot for this movie and you may think to yourself "Wow this is going so awful but at least I'm going to laugh of how bad the movie is". That was my prediction before …

No posts have been made on this movie yet. Be the first to start talking about The Voices!