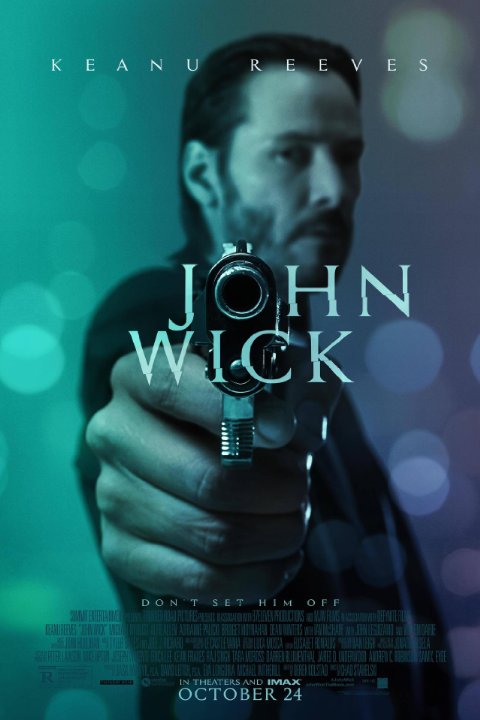 Plot: A former hitman finds himself the target of a one-time friend when a contract is put out on him. -- Chris Kavan

A "Death Wish"-style revenge triller that successfully puts Keanu Reeves back on the map as one of our greatest action stars.

I found nothing special or novel about this. But still good, watchable, and entertaining. WHY NOT?!

A supremely elegant thriller with a surprisingly rich mythology and an even more surprisingly stellar performance from Keanu Reeves.

The arrogant upstart son of a gangland boss steals the car and kills the puppy of a stranger, little knowing that he was once the most feared contract killer of the criminal underworld.
The coarse sentimentality of the opening, leading to an implausibly high but stylishly executed body count is very reminiscent of John Woo's early films and John Wick follows a similarly emotionally manipulative but thankfully unpretentious path. Dispensing with any and all frills, this film is little more than a 90 minute action sequence, packed to the gills with slickly presented death-dealing. Keanu Reeves' laconic one-man army is very much in the same mould of The Matrix's Neo and the comic strip violence is very reminiscent - if rather better - than the similar Wanted.
Hardly the height of depth …

"People don't change. Times do." It was cool seeing Keanu Reeves again after some absence and good will information about him. The storyline is very much simplistic and screenplay somewhat average. The highlights would be the choreography (one of the best much like the Bourne/Taken trilogy), pulsating music and lush cinematography and Sin City like subtitles. Would have been better to have in-depth history on Viggo, John's history and his marriage (since it was only emphasized in the start). One can never tell this could be a franchise in the making. Another thing that could have been nice was a prolonged hand to hand combat between Viggo and John. Overall, an average revenge flick but a very good action picture matched with awesome background music. Guess the quote from John "I …

16 years is a long time but Keanu Reeves Returns!

Former contract killer John Wick's motivation for killing 100+ people in this movie is perfectly understandable. Criminals break into his house, steal his car, and kill the dog Wick's deceased wife left him as a gift. Wick (Keanu Reeves) feels the compulsion to set things right and kill anyone in sight that is associated with the hoodlums responsible for his plight and sweet shit does he do some killing.
This is Keanu Reeves' best action movie since the original Matrix and among the best R-rated examples to hit theaters in some time. Two reasons for this are how the movie looks downright beautiful sometimes and more importantly, John Wick is played as a consummate professional despite also being a grieving widower or as a minor character puts it, vulnerable. John Wick does not play …

No posts have been made on this movie yet. Be the first to start talking about John Wick!