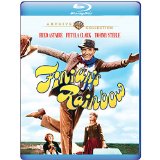 Good cast, good songs set around Finian (Fred Astaire), and his daughter Sharon (Petula Clark) who move to Rainbow Valley only to have Senator Billboard Rawkins trying to sieze their land seize their land using as an excuse an obscure law making it a felony for blacks and whites to live together, but Sharon, outraged at this bigotry, cries out while standing right over the pot of gold, "I wish to God you were black ..." all hell breaks loose as wishes come true.

Whist Og the leprechaun (Tommy Steele), has followed Finian to America he's trying to get back his gold from Finian who is now a size of a normal man and not happy.

Family / Fantasy / Musical for all the family to watch

With great songs such as Look To The Rainbow / How Are Things In Glocca Morra?"
Lyrics by E.Y. …

The Films of Francis Ford Coppola by Sebman

No posts have been made on this movie yet. Be the first to start talking about Finian's Rainbow!