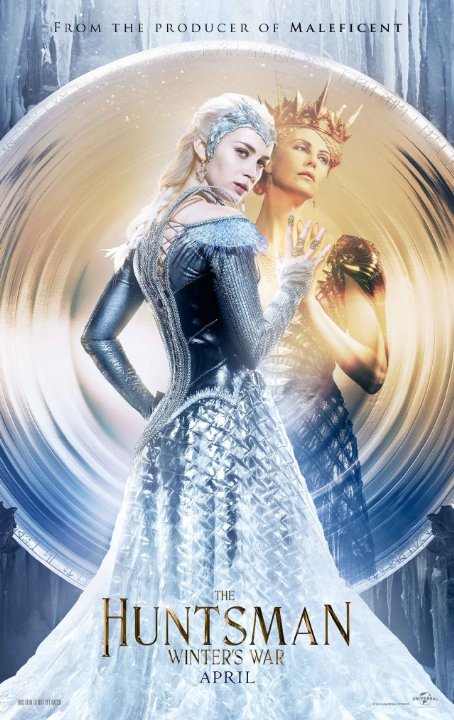 Plot: When Freya, the Ice Queen, resurrects her sister, Ravenna, the two plot to conquer the land. It will take the renegade Huntsman, Eric and his forbidden love Sara to stand up against them -- Chris Kavan

A great cast wasted in this sequel/prequel whatever to Snow White and the Huntsman. Though there are some decent action scenes, the overall tone is bland and uninspiring. Much like the Alice in Wonderland sequel, I figure this was made more to make a quick buck off a surprisingly strong first film, rushed and suffered greatly as a result.

While boasting a better cast and a more imaginative setting, Winter's War is ultimately a pointless callback to 2012's surprise hit Snow White&The Huntsman. After a ponderous first act, the film picks up and even the picture brightens once the adventure gets started. This false security leads us to a confusing and rushed showdown that I can only describe as 'Frozen but EXTREME". I can't even figure out if it's supposed to be a prequel, a sequel, a reboot, or-oh who cares? It stinks.

'The Huntsman: Winter's War' might be 2016's most completely unnecessary sequel. Well, prequel/sequel. To continue 2012's 'Snow White and the Huntsman', the writers decided to add new characters that somehow existed before and during the first film. By doing so, they ret-con a lot of the first movie in order to have this story make some sense (which it doesn't). This major flaw permeates throughout to the point where it makes every plot point either nonsensical, or incredibly convenient. Everything comes off as a dumb cliche, lacking any originality. So much of the new characters, and their actions, are severely derivative of so many other fantasy franchises. I spent most of the runtime spotting blatant similarities to better material, instead of being engaged by the story at …

Did anyone really ask for this? The first movie wasn't anything that special and quite unnecessary when thinking about it, and so was this movie but even more unnecessary.

Emily Blunt and Jessica Chastain are both solid actors that always give a good performances, but not in this movie. Chastain Scottish accent is so awful and so distracting that I'm surprise not a lot of people have bought this up. Emily Blunt dose what I call "The Eddie Ascending performance" where she talks really quite at the first and then out of nowhere just explode with rage.

Chris Hemsworth and Charlize Theron are also in this movie...and both are given nothing to do.

Overall: "The Huntsman Winterâs War" is a joyless, empty, and a very dull flick that takes away the magic from a fairy tale.

No posts have been made on this movie yet. Be the first to start talking about The Huntsman Winter's War!