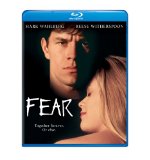 Plot: The Walkers have the perfect family life until the night that 16-year-old Nicole meets handsome, charming David at a party. At first glance he appears to be a great boyfriend, until it becomes apparent he's jealous and possessive - enough so that she breaks up. However, David isn't about to let her go that easily. -- Chris Kavan

Mark Wahlberg's performance as an unhinged obsessed school boy is really the only thing that makes this trash thriller watchable.

I felt this was a weaker version of Cape Fear and Fatal Attraction with then future talents. Starts out great then fizzles because of the weak screenplay. Fear is a decent thriller with lacks the emotional punch and could have been better than its outcome.

This was the film i was introduced to one of my top 5 fave actors Mark Wahlberg! Wahlberg plays the psychotic boyfreind to a tee putting out an all to scarily real performance! Wahlberg plays David who after meeting 16 yr old Nicole at a local pool hall the couple fall instaneously in love with each other as David seems to be the Eddie Haskill(Leave It To Beaver) you know the type very courteous and neat however deep down inside lurks a rage in the cage! Nicole's dad(Peterson(Csi's Will Griffen) right away sees through this wolf in sheep's clothing and tries his best to keep the couple apart. Knowing right well that her relationship to this dude will not end well.

Of coarse this doesnt go well with Nicole(Reese Witherspoon) who insists on seeing him anyways. As you probably have …

No posts have been made on this movie yet. Be the first to start talking about Fear!