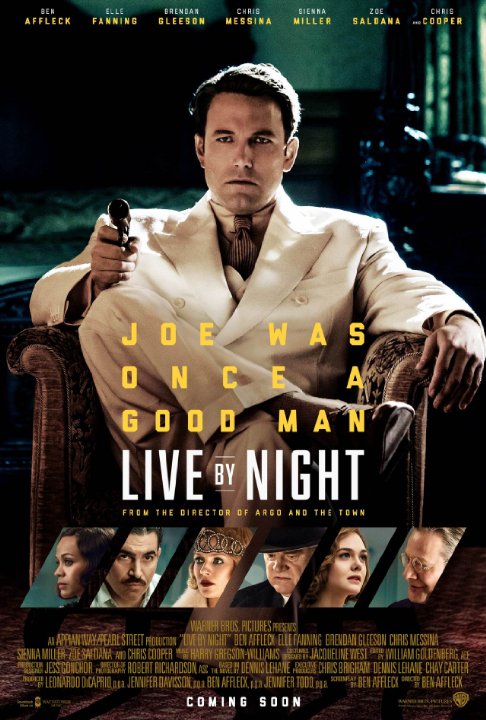 Plot: Joe Coughlin, son of a Boston police captain, lives his own life far from the proper upbringing he has long since turned his back on. The era of prohibition is ripe for thrills, notoriety and the perks that come with being part of the premiere underworld scene. But the seedy side of life holds its share of danger - trust is hard ot come by and an early death is all but guaranteed. -- Chris Kavan

Ben Affleck directs and stars as rising crime boss Joe Coughlin in LIVE BY NIGHT which pits him against cops, klansmen, and rival gangsters. The cast is good and Affleck's direction is solid. The shootouts, car chases, and the period details are excellent. But the movie's pacing is sloppy and characters reappear when it's convenient. It almost feels like a 3 hour movie cut down to a roughly two hour running time. However, this does not mean the movie is boring or uninteresting. Hardly, it's got some cool action and sharp dialogue to spare. But it's a noticeably rushed affair.

"I swore If I made it home, I would never follow orders again. I left a soldier. I came home an outlaw."

Ben Affleck isn't exactly one of my favorite actors. Not that he's such a terrible actor, but he's such a smooth guy who manages to play in some outstanding movies every time. Movies that didn't leave an everlasting impression on me anyway. In retrospect, it's really a giant list I've seen him in, such as "The Accountant", "Suicide Squad", "Batman v Superman", "Gone Girl", "Runner Runner", "Paycheck", "Changing Lanes", "Pearl Harbor" and "Daredevil" (absolutely his worst performance). The only memorable role he played was in "Good Will Hunting". Most probably it's due to the participation of Matt Damon and Robin Williams. He was also successful as a producer and directed the …

No posts have been made on this movie yet. Be the first to start talking about Live by Night!