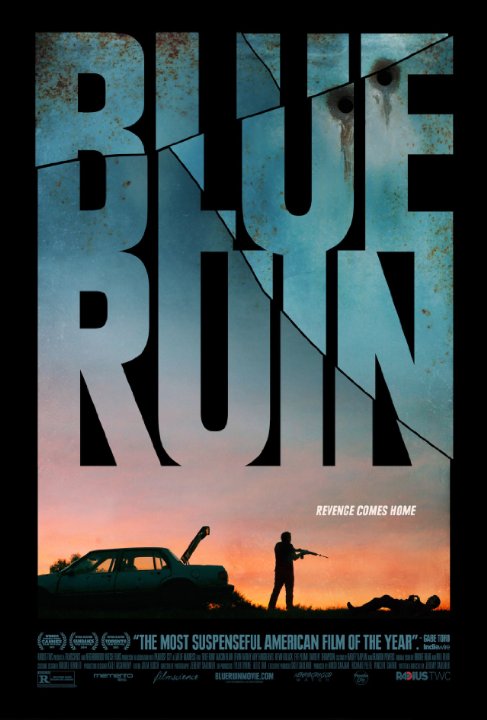 Plot: A loner returns home after long absence in order to carry out vengeance as he sees fit. But his revenge is not well planned and before he knows it his act puts his estranged family in dangers unless he fights back. -- Chris Kavan

Revenge is a dish best served cold. Proving that feuds are alive and well in the modern era, Blue Ruin gives us the story of a man seeking vengeance for his parents' murder. The day the killer is released, he exacts his revenge. His plan goes awry, however, and it puts the rest of his family in danger. Realizing the only way to make sure they are safe is to take out the entire family - he sets off on a new course, even at the price of his own life. Blue Ruin is bleak, mostly dialogue-free and often bloody. Shades of the Coen Brothers abound and it packs a punch. Can't wait to see the follow-up to this one.

It's refreshing to see slower, quieter, more realistic films such as this. 'Blue Ruin' is not a typical 'revenge' story. The reasonings for the vengeance are found through progression. But that's not the focus. The intent here is to show the effects of such acts. No matter how you go about it, no outcome will be for the better. The unpredictable plot leads to some tense situations. The narrative flows naturally smooth. Easily watchable and also quite engaging.

I've heard & read so many good reviews for Blue Ruin that I just couldn't wait to see it.I was expecting a masterpiece, I was expecting to eventually add it to my DVD collection, I was expecting to LOVE this movie.After watching Blue Ruin, the main thing I felt was disappointment.When I 1st started watching I couldn't wait to watch, by the middle I was BORED & at the end of the movie I was wondering, What did I just watch?! Where was the movie I heard & read so many good things about? I'm so happy I was able to watch this movie for free.If I had to pay to watch Blue Ruin (Especially in a theater) I would've wanted my money back.Movies like Blue Ruin are the reason why I hardly ever go to see a movie at the theater nowadays.What a let down!!!

A man whose life was ruined when his parents were murdered discovers that their killer is to be released from jail and so travels to his home to extract a bloody revenge. Blue Ruin on the surface seems like a very straightforward revenge story, but this is misleading as the film is more about the consequences of that revenge than the deed itself with "an eye for an eye makes the whole world blind" the primary message. It has the low key and pragmatic yet rather off beat style of a Coen brothers' film and the bleaker examples such as Blood Simple and No Country For Old Men in particular. The use of a no-star cast makes its realist approach all the more successful and the way an ordinary guy becomes embroiled in a world of violence that spirals out of his control reminded me a little of …

This is a quality movie full of tension . it starts with a homeless guy with a big beard and a real sense of stark and lonely reality from the look and feel of the movie. and it makes you wonder where its going and who he is. well without spoiling things for those who haven't seen it. this turns out to be revenge movie but not your normal kind. its much more real . this is not some movie star kicking ass or anything like that. this is a normal yet troubled guy without a clue who ends up out of his depth.. but continues on regardless.
There's some great scenes. the car boot one. the arrow scene in the car are both. simple yet different and so well shot. above all they memorable
The acting is great the main Character played to perfection i thought. the ending is good but the nice …

Favorite Films of 2014 by illuminaria

No posts have been made on this movie yet. Be the first to start talking about Blue Ruin!