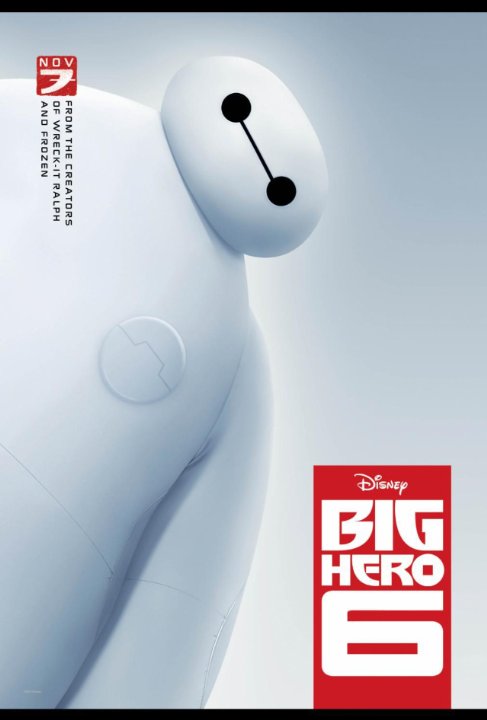 Plot: The incredibly fast-paced and tech-heavy San Fransokyo is under attack - but robotics expert Hiro Hamada, with his robot Baymax, will team up with some reluctant, novice crime fighters in order to save the city. -- Chris Kavan

Smartness overload! The technology and talents of all the characters were beyond my comprehension. GENIUS!

ADORABLE! How could a giant white robot with an expressionless face make someone feel better? Sometimes, presence is all that matters.

This movie taught me the essence of confidence and perseverance. If you put your heart and mind into something, things are possible.

I'll admit I was caught completely off-guard with this one. I had no idea this was going to be a superhero movie. Disney has done it again with this one. I don't know what is is about robots, but between this and Wall-E, animation studios are able to make them seem more human than the "real" people. I also was caught off-guard by who the villain is, my wife was not however.

But this is a highly entertaining film about a boys love for his brother and his robot. And man, does this boy have it rough. Parents...dead. Brother...dead. He has nothing except his brother's friends and his brother's robot, Baymax. Baymax's entire being is built up on helping people, while Hiro only wants to avenge his brother's death...and get who stole his big idea. It takes some twist and even keeps …

Baymax has to be the most adorable and coolest Disney character I've seen in a while.

The story is about San Fransokyo being under attack - but robotics expert Hiro Hamada, with his robot Baymax, will team up with some reluctant, novice crime fighters in order to save the city.

Just like every year Disney always brings out films that are mostly good or adorable, and a long comes Big Hero 6 and this movie is on the level of adorable, but not that close to brilliant.

The animation in this movie was so colorful and so gorgeous to look at that my eyes couldn't get enough of it. The character's were funny and pretty awesome, even Baymax which has to be the most adorable and the most lovable character I've seen on the big screen. The action scenes were really well shot and enjoyable …

No posts have been made on this movie yet. Be the first to start talking about Big Hero 6!