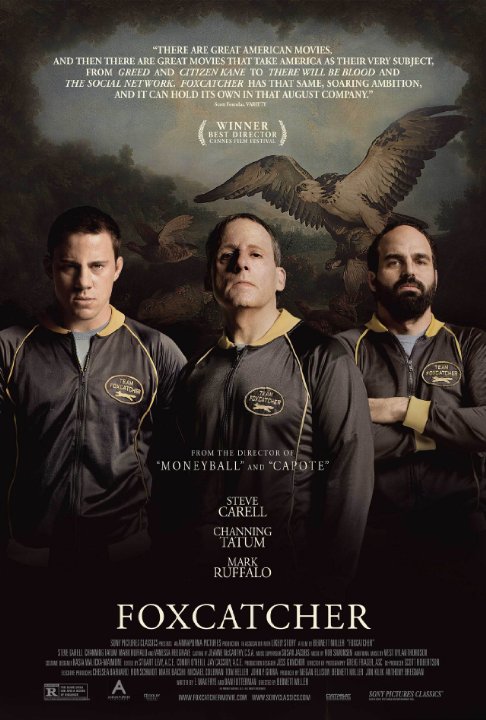 Plot: Based on the true story of Mark and Dave Schultz - brothers and Olympic championship wrestlers, who found themselves involved with John du Pont - their sponsor and eccentric multimillionaire. This relationship would eventually lead down a path to murder. -- Chris Kavan

While its characters are multidimensional and its plot is solid, they're both so overwhelmingly boring.

If nothing else, Steve Carell is really creepy.

Bennett Miller's dramatization of the bizarre and ultimately tragic relationship developed between a reclusive millionaire and a sibling pair of Olympian wrestlers features fantastic performances from its three main actors. Steve Carrell is especially good as John DuPont, the lonely and volatile sports promoter (and black sheep of his family) who sets the plot in motion in an effort to claim something for himself to be proud of. The story IS good and the direction is solid but the pacing is often glacially slow and timeline of events as they occur is sometimes confusing. As other reviews posted for this release have already noted, little is laid out to the audience who has to figure out things for themselves at times. It is not necessarily a bad thing for a movie to do this (especially …

'Foxcatcher' is a well done piece, all-around. The realistically unsettling tone presents the damaged psyches of the main characters in an unflinching light, adding to the already terrific performances from the entire cast. Tatum comes into his own in this film as the central character. He gives the perfect nuance and sympathy to an emotionally closed off person. His was the only character whose reasonings and motivations I could somewhat grasp. I could only piece together a loose understanding of John du Pont. There's never any hint at what is going on in his head. He's so cold and standoffish in presentation that the whole film follows suit. The ever-so-slow pace counteracted the lack of involvement I felt while watching. When the finale happened, I was left pondering Pont's …

Calling Steve Carell character (John du Pont) creepy is me being to nice. This guy is just chilling, unsettling, disturbing and can't stand to watch sometimes.

The film Foxcatcher is Based on the true story of Mark and Dave Schultz - brothers and Olympic championship wrestlers, who found themselves involved with John du Pont - their sponsor and eccentric multimillionaire. This relationship would eventually lead down a path to murder.

Foxcatcher had a lot of hype not because of the director or the other actors like Channing Tatum and Mark Ruffalo. The hype was for the comedy star Steve Carell has he takes a different performance from his usual comedy performance and how unnoticeable he is in this movie. There was a lot of Oscar Buzz about Carell performance for months after months …

Favorite Dramatic Movies Starring a "Comedic Actor by The WHB

No posts have been made on this movie yet. Be the first to start talking about Foxcatcher!