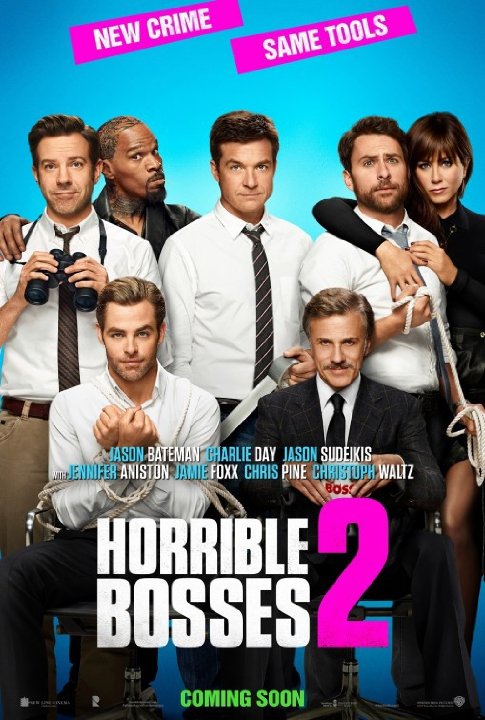 Plot: After dealing with their old "horrible bosses" the trio of Dale, Kurt and Nick decide to become their own bosses - and start up their own business. But when a slick investor torpedoes their plans and crushes their dreams, they know the only way to get what they deserve is to hatch an ingenious (misguided) kidnapping plot. -- Chris Kavan

Luckily, Christoph Waltz was in this film or it wouldn't have been worth watching at all. It was a significant decline from the previous Horrible Bosses movie.

The movie was a bit of fun full of PJ's but that wasn't enough to enjoy the audience. Though I quite enjoyed their original outing, second time around for our woebegone heroes is a horrible dud. On the plus side,the camaraderie between the trio is intact; Aniston and Spacey do not disappoint in some deliciously villainous scenes; Foxx brings much needed braininess; and Pine and Waltz are both welcome additions (though the latter is criminally underutilized).

horrible annoying and a massive let down

The first horrible bosses was good and funny this one was awful, almost every scene throughout the whole movie is people talkign utter rubbish over eachother its so annoying and is that somehow meant to be funny.
3 guys acting like thick idiots and all talking at the same time. it must of been one of the most annoying movies ive ever seen.
This time they are the bosses but get ripped of and are about to lose their company so they set out to kidnap the son of the father who ripped them of to try and get the money to save the company.
of all th storylines they could of done and they chose this. such a poor unrealsitic idea.
on the plus side the cast is great but kevin spacey is hardly in it and his scenes are annoying as well.
jennifer aniston who was so good in the first one is not …

Is this the new The Hangover Part II?

The story is about are three main morons Dale, Kurt and Nick decide to become their own bosses - and start up their own business. But when a slick investor torpedoes their plans and crushes their dreams, they know the only way to get what they deserve is to hatch an ingenious (misguided) kidnapping plot.

To people who don't know I actually liked the first film, it's not anything amazing or awesome, it's just a decent comedy with many laughs. Then I heard there where going to make a squeal and I think it's about last year I think, but anywhere I was a bit interested of what they can do next and how they going to top the first one, but I really wasn't expecting anything this horrible and disappointing as this movie, because Horrible Bosses 2 …

Horrible at Being Bosses

'Horrible Bosses 2' is an unnecessary sequel. The setup gives us a new angle: the returning three main characters are now their own bosses. I thought the story would take this route to new funny places. Instead, it retreads plot beats and recycles some jokes from the first as a way of saying 'oh look, this happened again'. Not in a self referential kind of way, either. Our three compadres were likable losers who had potential, but were inept at committing crimes. Here, Sudeikis and Day are reduced to absolute idiots, while Bateman becomes frustrated with them constantly. The routine is tiresome. I did have a few chuckles, and it is a harmless watch. But when there's no good solid laughs to get you past the lame rehash, it becomes pointless to endure the overall mediocrity.

No posts have been made on this movie yet. Be the first to start talking about Horrible Bosses 2!