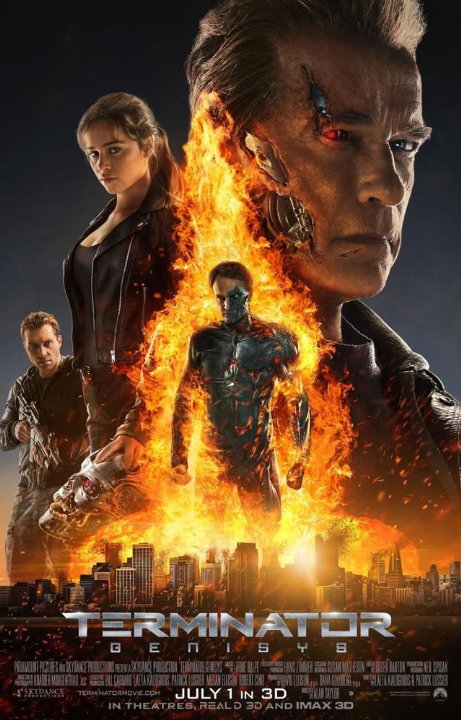 Plot: In the year 2029, John Connor leads the resistance of man against Skynet and an army of machines, but as he readies a plan to save the past from this devastating future - Skynet rewrites history with their own plan - one that targets Connor in the past and present - and he may not be able to survive an assault on both fronts. -- Chris Kavan

Not sure I understand all the hate for this movie. It was entertaining and had some great call-backs to the first two films and the casting was solid. Sure, you can fry your mind trying to figure out the time travel and how it all works out - but if you don't overthink things and just enjoy it for what it is, you'll get some satisfaction out of things.

For more reviews visit www.KalpeshPrajapati.com Terminator Genisys â Rating 9 out of 10 Youâll need your brain and a notepad to watch this movie because this terminator is set to keep you at the edge of your seat to extent of you pulling you hair when you miss the connection between 2 scenes. So pay attention!. Arnold is back and back with a bang! He has aged but is not obsolete. This movie is a good reboot to the terminator series keeping the story same but reversing the roles of terminators and John Connor. The breathtakingly amazing stunts combined with excellent visual effects would definitely be liked by the audience.

A soldier of the human resistance is sent back in time to protect the mother of humanity's saviour from assassination, to find that the move has been preempted by both Skynet and another reprogrammed terminator.

The argument against absurdly convoluted time travelled stories usually goes that time travel is impossible anyway so it's best not to pick holes in the story, but there does come a time when credulity is stretched beyond breaking point; this is the case with the ludicrous info-dumps of exposition of the first act of Terminator: Genisys, which come across as little more than a series of excuses for the film's own existence. Remaking scenes from the classic original also serve only to highlight its own inferiority in every way as does the dubious casting of both Jai Courtney …

It lacks the R-rated punch and grit of the first two Terminator movies but Genisys is an entertaining sequel which cannot be accused of laziness. Its plot shows more ambition than any fifth wheel of a sequel has any business demonstrating. Arnold Schwarzenegger is back and having a ball as the grizzled T-800 (the friendly one). Can you believe he's like 70? Emilia Clarke and Jai Courtney wisely don't try to emulate Linda Hamilton and Michael Biehn as they only end up being functional but not very memorable. They do get some good one-liners occasionally. Jason Clarke has perhaps the juiciest role of the picture and I'll leave it at that. The movie is smart enough not to overstay its welcome and delivers its share of sci-fi action and time travel mumbo jumbo. Is it necessary viewing? Not …

Arnold Schwarzenegger is back as the veteran Terminator as we have our fifth installment in the franchise: Terminator Genysis. The first two movies were really good as they were influential to action and sci-fi movies. This movie, however, is nowhere near as good as the first two. The story in this movie is extremely confusing to the point where I wonder if the screenwriters have any idea what's going on. Not only is the plot super convoluted as the story goes on, but it's not really that interesting. The characters doesn't really do a whole lot for me, even though I know that the actors are trying their best. The best parts of the movie is that Arnold Schwarzenegger is entertaining as the aged Terminator and some of the action scenes are actually well handled and nice to look at. …

No posts have been made on this movie yet. Be the first to start talking about Terminator: Genisys!