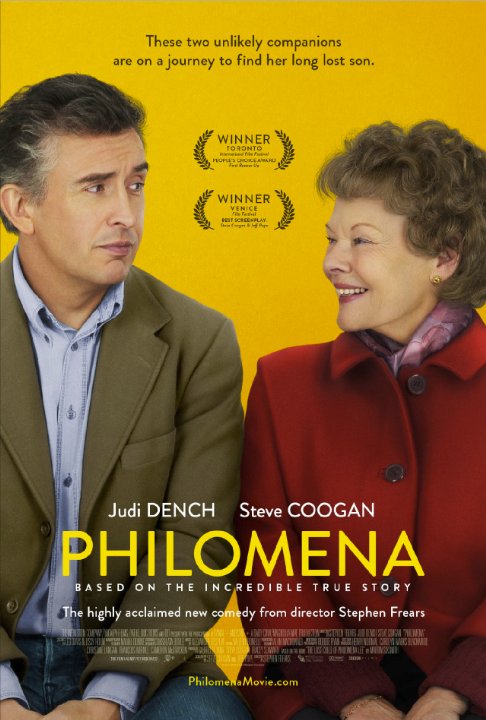 Plot: A saavy but world-weary political journalist settles on a story involving a woman looking for the son she was forced to give up after she became pregnant and was relocated to a convent. -- Chris Kavan

One of the finest movies of 2013, it's not overbearing or uncomfortably sentimental, and Judi Dench and Steve Coogan are perfect together.

This one kind of broke my heart a little.

A saavy but world-weary political journalist settles on a story involving a woman looking for the son she was forced to give up after she became pregnant and was relocated to a convent. This movie is heartbreaking and moving. the actors steal the show in this film with Judi Dench and Steve Coogan are the highlight of this film.

I have a confession to make - and that is, I'm not a fan of "based-on-true-story" films. Often these films are presented in overly-sentimental tones (see Blindside and A Beautiful Mind) or take great liberties with the source material (Braveheart, JFK). Even some of my favorite films in the genre, like Argo or Bridge on the River Kwai, rewrite history. The problem is I tend to over-analyze films I care about, or simply roll my eyes when things get too sickly sweet. While Philomena isn't perfect, it does the remarkable job of presenting the story that is emotional without feeling like it's trying overpower you with sentimentality while at the same time being true to the real story.

A bad aftertaste of sentimentality.

To be perfectly truthful, I really wanted to like this film. I mean, I want to like every film and give everything a chance, but the amount of uninteresting plot lines and things we've seen before, including Steven Frears' uninspired direction and the lazy screenplay absolutely overwhelm this movie, and trust me when I say: it's been a long time since I have seen a movie as cheap and unwarranted as Philomena.

It's by no means a terrible movie, but by even lesser means a good one.
I didn't precisely mean to say it was an unwarranted movie, there is plenty of interesting material in the story itself, which I bet is heartbreaking, but the way the director and screenwriter present it makes it as interesting as the shuffle function on my iPod.

A practically empty movie which once again …

No posts have been made on this movie yet. Be the first to start talking about Philomena!