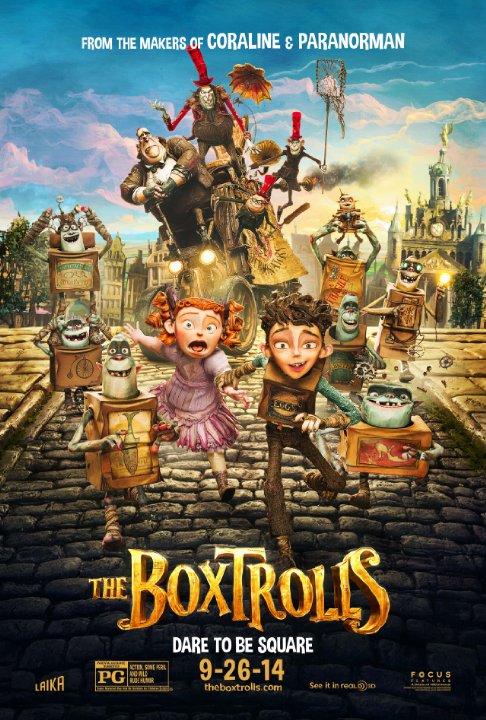 Plot: Based on the book "Here Be Monsters" by Alan Snow: A young orphan, raised by subterranean trash collectors, must find the hero inside when an evil exterminator threatens his family. -- Chris Kavan

Delightful, engrossing, and fun for all ages.

A very creative and entertaining animated film. Laika has a distinct style and the studio really does well in establishing itself amongst the giants like PIxar and Dreamworks. This is one of the good animated films where both adults and the kids will be equally entertained. The vocal talent is equal to the strength of the animation - this is a keeper.

Laika's latest has their most kid-friendly story and characters, but it is still very enjoyable for all ages. It's less theme heavy than their previous films, focusing more on pure entertainment. And it delivers! Here you'll find colorful visuals, creative character designs, clever humor, and a great absence of plot cliches. A pleasantly fun watch.

The Boxtrolls is a solid family movie.

You know in those Claymation movies where the characters have skinny arms and legs, but they have big belly's, um... something is not right about that.

The story is about a young orphan, raised by subterranean trash collectors, must find the hero inside when an evil exterminator threatens his family.

The beginning of this movie started a bit slow and I wasn't feeling it, but as the film went a long it became better. The voice acting in the film was well done. The villain in the film to me had a really stupid plan that didn't make scenes at all, and he was a cliche messed up villain with nothing really new to him, but Ben Kingsley did a good job voicing him. The jokes worked at times and sometimes they don't. But overall the Boxtrolls is a solid family movie with so dark scenes …

Laika studios has been a strong force for good for some years now, but they are not infallible. Their latest stop motion production, The Boxtrolls, is just as wonderful to look at as the rest of their catalogue, possibly even more so; but itâs also possibly the weakest yet. The Boxtrolls doesnât really deserve too much negative criticism, itâs still a lot smarter than most animated films that are released to such a degree, but itâs difficult not to have ridiculously high expectations when you go into a movie that might as well be a sequel to the brilliant Paranorman.

In a world filled with empty headed childrenâs films, we need more like The Boxtrolls. It combines the intelligence of a movie like Frozen and combines it with some sick fun and originality. Childrenâs …

No posts have been made on this movie yet. Be the first to start talking about The Boxtrolls!