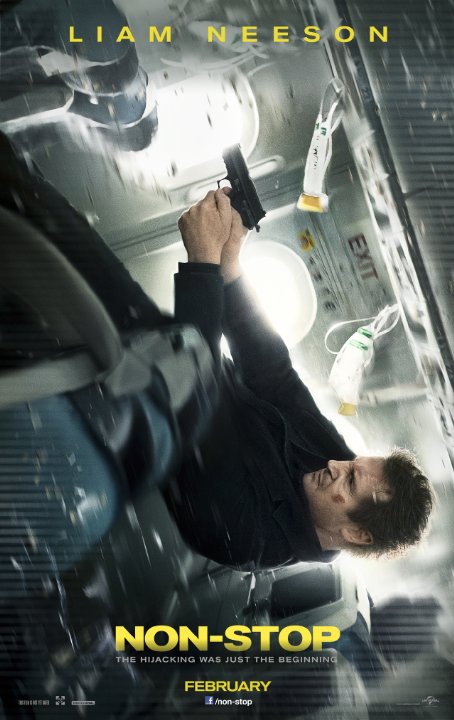 Plot: When an international flight is threatened, a lone air marshal must come up with a plan to save the plane and the passengers. -- Chris Kavan

It's a fine, perfectly enjoyable and sporadically thrilling action movie directed with style by Jaume Collet-Serra (Unknown, Orphan). It feels so run-of-the-mill and so generic, but it's easy to overlook due to Liam Neeson's amazing screen presence. That's really the best you're going to get here. You want Neeson, Non-Stop provides some of the best you'll get. Cheers! 2.5/4

When an international flight is threatened, a lone air marshal must come up with a plan to save the plane and the passengers. Liam Nesson is back and this time he saved and kicked so ass in a film. The action is enjoyable and this movie is not Cliche as I thought it will be.

"I'm not hijacking this plane. I'm trying to save it!"

Not very original, but unnerving exciting at times. "Captain Philips", "Speed", "Last passenger" and "Under Siege". There isn't a vehicle that drives, sails or flies, and it has already been hijacked in a movie. It seems as if Liam Neeson really likes playing in action movies. And just like in "The Grey" he's a person who struggles with his past.

Bill Marks (Liam Neeson) is an Air Marshal who actually has an aversion to flying. Because of the loss of his little daughter, he's a bit in the doldrums. The beginning of the movie shows a decrepit, not so fresh looking Marks, pouring a bit of whiskey in his coffee. A security guard with an alcohol problem who's about to get on board of a trans-Atlantic flight. That's asking for …

If it wasn't for Liam Neeson, Non-Stop would have been the 2014 equivalent of Passenger 57 - that is, generic action at its finest (only on a plane!). Lucky for use, Neeson has took up the helm for aging action icon that Arnie and Stallone could only wish for. That being said, Non-Stop isn't perfect by any means, but for those who like action, along with a bit of suspense, this movie will scratch that itch.

Neeson has perfected the art of playing the battle-hardened, yet not heartless, agent/officer/Jedi Master - and in Non-Stop he can add alcoholic air marshal to the list. We know from the start he has issues - but also know he's a good buy because he helps a child overcome her fear of getting on an airplane with the old stuffed animal trick. Shortly into his hours-long international …

Liam neeson doing what he does best but this time on a plane. trying to figure out who the person is who is killing the passengers and who has planted the bomb. The tension is pretty good as you spend a lot of the film trying to figure out who it is. i would of rated this movie as good but it gets corny and goes limp towards the end.
The little girl is just corny. the whole alcoholic backstory of neeson is tired and pointless. the chats with ground control were just silly. and the ending was just too corny for words.and very lame. the other passengers reaction to what was going on and there being a bomb on the plane was so unrealistic., such a shame as the first 3 quarters of the film is pretty good and could of been better if they took it more seriously they could of made a really …

No posts have been made on this movie yet. Be the first to start talking about Non-Stop!