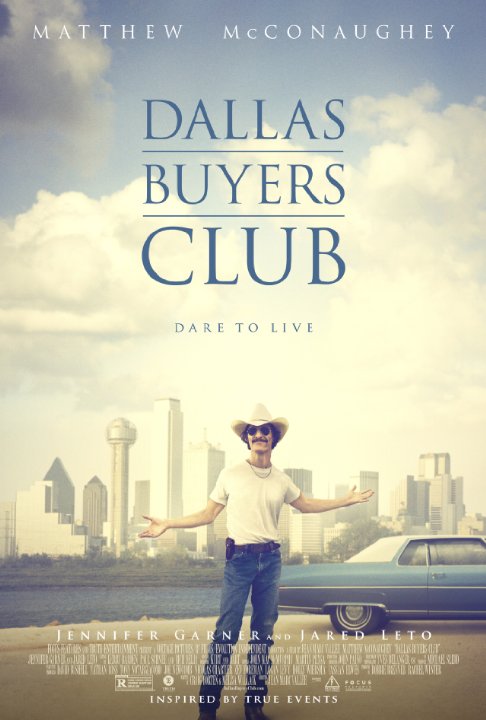 Plot: In 1986, Texas electrician Ron Woodroof was diagnosed as HIV positive and found it nearly impossible dealing with the medical establishment and pharmaceutical companies in finding proper treatment. Seeing no other alternative, he came up with his own solution, and helped many HIV-positive people like him in the process. -- Chris Kavan

Excellent performances and thought provoking story about a journey defined by empathy make this movie great.

This is an "actors' movie." The acting was phenomenal! Matthew McConaughey and Jared Leto absolutely deserve their Oscars. However, despite the heavy lifting that those two, and really the whole cast do, I felt like this could've been better. That's on the screenwriter and the director. It's not a bad movie, in fact it's really good, but it just felt like something was missing. In some spots, I felt like the movie went by too fast, in others, I felt like it just dragged on. However, I would recommend this film to anyone.

Average film about finding connections after a life changing transformation. It is supposedly about modern enlightenment and how although we are divided, we can all come together. The main character is a chauvinistic redneck who learns to dispel his negative bigotry about other's sexual preferences and unite them in finding a cure which has been withheld by the inefficient FDA.

An example of impressive acting

I swear it, Ray, God sure was dressin' the wrong doll when he blessed you with a set of balls.

I admit. Everyone will probably repeat this infinitely times. The acting of Matthew McConaughey is irrefutable top level. I'll do it just one more time ... the acting of Matthew McConaughey is top level ! After I saw him in "The Lincoln Lawyer " where he plays a lawyer who works from out of his Lincoln, there was a sign of sheer acting talent in the movie "Mud". "Mud" isn't an average movie. You like it or you hate it. But it it does show that he isn't an ordinary actor. The metamorphosis in "Dallas Buyers Club" is even more spectacular. Physically it must have been quite a sacrifice in order to lose that much weight. The image of him lying in the hospital next to Rayon and his hospital …

A hard drinking, womanising, homophobic Texan is diagnosed with HIV in the 1980s and goes on to champion alternative treatments in the face of strong opposition from the establishment. Once again Matthew McCaunaghey shows his true mettle with yet another great performance as the initially obnoxious red neck who learns tolerance and acceptance when confronted with the object of his derision; in this case AIDS victims and homosexuals in general. It makes for an engaging tragi-comic true life story that exposes the corruption of the FDA's practice of banning all alternative treatments, despite the fact that the medication they approved was highly toxic and showed questionable results, because of the financial incentives of the big pharmaceutical companies. Jean Marc Vallee shows an …

No posts have been made on this movie yet. Be the first to start talking about Dallas Buyers Club!