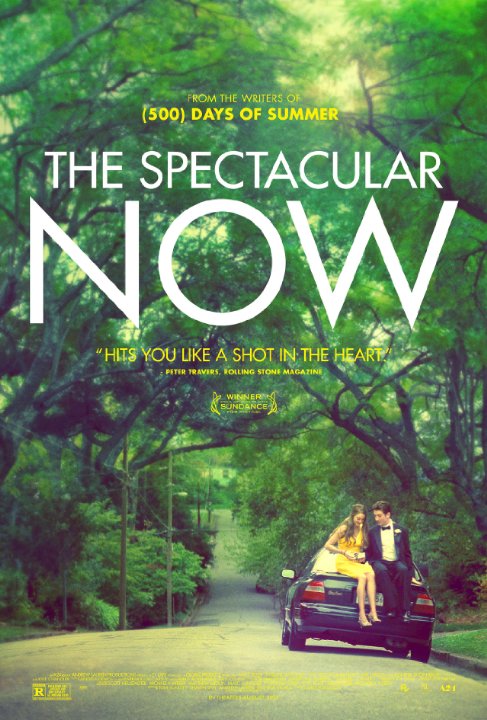 Plot: A high school senior enjoys living in "the now" - a steady job, the life of the party, a budding alcoholic - and no thoughts for the future. Yet when his girlfriend dumps him, a night of binge drinking finds him being awoken on the lawn by Aimee Finicky - a the "nice" girl with plans for the future. Their paths may be as different as can be - but somehow the two click. -- Chris Kavan

Bold and lively, "The Spectacular Now" is a coming-of-age tale that really stands out in the modern age of teen movies.

This movie has it's SPECTACULAR moments and it's wonders, young audiences should watch this movie because it's about young love at such young age. this movie is a beautiful and moving Project that it's not a shame of what it is trying to pull off.

If you have been in love, you will probably find yourself smirking at the sight of this movie. Because it understands the story of love as well.
I've always been keen on watching independent romance films, because they tend to be the exact opposite of the shallow rom-coms in the mainstream of today (examples: The Ugly Truth, Good Luck Chuck, etc.), and The Spectacular Now is no exception.

The Spectacular Now is one of the most heartfelt and humanly influential films I've seen all year.
As much as its characters thrive to be mature, the whole movie succeeds in showing the deepest levels of maturity.
Shailene Woodley is a great new talent, I'm sure, she may win some awards if she keep going on the same route as The Descendants and now this film.
She embodies the slightly introverted …

One year - three excellent coming-of-age films, all of which currently stand in my Top 10 Best of 2013 list. Being that I'm a teenager in high school (currently a senior... that college stress is a comin'), I always find these types of films to be the most relatable and, when done passionately, the most moving. There's just something about coming-of-age stories that touch my heart - the characters, the stories they live through, the difficulties they face, and their journey in overcoming that, hence "come of age." From films like The Goonies and E.T. to most recent ones like The Way Way Back and the outstanding Perks of Being a Wallflower, well-crafted coming-of-age stories have always been the ones that stick with me emotionally.

The Spectacular Now tells the story of Sutter (Miles …

Here is one high school age drama that feels realistic in it's character's personalities, their romantic relationship, and their emotions. I found many aspects of this film to be relatable, mostly from Teller's character. He and Woodley share many genuine scenes together. The believability in their performances is amplified as they become closer to one another. These are the high points of the film. The emotions are just as strong in scenes involving Sutter's other personal and family problems, as well. The film does good to steer clear of genre conventions and cliches. However, there are a couple of scenes that I felt were completely unnecessary to the story and they diminish some of the emotion generated moments before. But in no way do they come close to ruining the film. The …

No posts have been made on this movie yet. Be the first to start talking about The Spectacular Now!