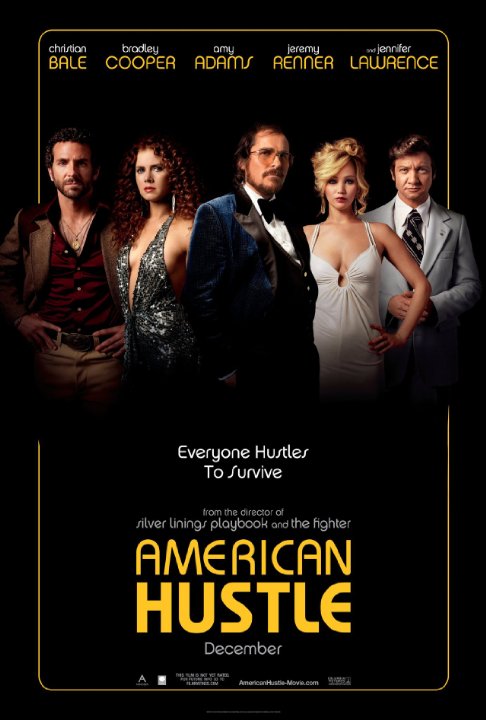 Plot: A con artist and his partner are forced into an alliance with a federal agent where they work against people just like them - all in a bid to bring down the corrupt, volatile mayor of Camden, New Jersey. -- Chris Kavan

A wonderfully acted film. David O. Russell does it again, spinning a hard-to-follow tale, much like his I Heart Huckabees (2004). He seems to have found is muse or is it, muses? I don't know, but Bradley Cooper and Jennifer Lawrence are back just like they were in Silver Linings Playbook (2012). The tale is tricky, but in the end, you can, somewhat , figure out what just happened. And that's the point. We're not supposed to really know who's conning who. Even if only part of this is factual, and I don't know where the fact ends and the fiction begins, this is a highly entertaining film that is a must-see. And remember, don't put any metal in the science oven.

I have to admit, I was expecting a bit more - the performances, for the most part, didn't wow me (though Jeremy Renner was a standout and Amy Adams - side boob and all - was excellent), but even with that letdown, American Hustle works because it really does transport you. The hair, the clothing, the music - it is all perfect and even if the story isn't "true" - it has enough element of reality to make it worth your time. Not the best movie of 2013 - but certainly one of the better ones.

A pair of con artists are blackmailed into helping the FBI entrap corrupt politicians or face jail. David O. Russell's long con comedy drama was very well received upon its release and fans of Martin Scorsese will no doubt see his influence throughout the film. It has the flavour of a PG rated version of Casino as these amoral hustlers try to out manoeuvre each other while staying one step ahead of the organised criminals they are charged with duping. Its light-hearted tone makes for a few amusing moments, often revolving around Christian Bale and Jennifer Lawrence's car crash of a marriage and the general level of ineptitude displayed by this cut price Ocean's crew. But one thing the story didn't seem to have is any kind of narrative momentum. It just seemed to be a loose collection of …

I really enjoyed this movie. The story was fun but the acting, music and costumes made the movie. Every actor in this movie was phenomenal and they all earned every acting nomination they got and more. The music and the costumes were great and made the movie fun to listen to and watch. The story got a little slow in a few places but the amazing acting and great costumes kept thing interesting at those parts. Christian Bale had to hands down be my favorite actor in the movie. He played the part perfect, you wanted to dislike him but he had just enough redeeming qualities to make you have like him. And with all the make up and wardrobe you almost for got you were watching Christian Bale. The rest of the cast was great as well, Amy Adams was incredible as con-artist Sydney and Jennifer …

No posts have been made on this movie yet. Be the first to start talking about American Hustle!