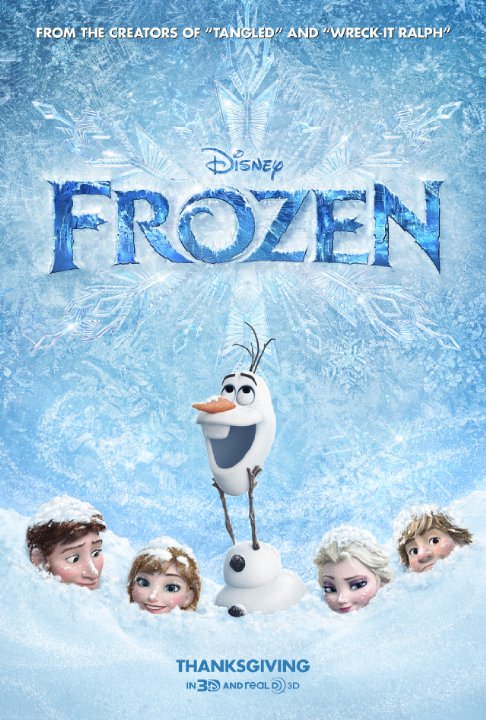 Plot: The kingdom of Arendelle are under a constant eternal winter due to the icy powers of Elsa. But that doesn't deter her sister, Anna, from trying to break the spell. Facing daunting conditions, mystical trolls and one wacky snowman, she will team up with rugged mountain man Kristoff (and his reindeer Sven) in order to save her kingdom. -- Chris Kavan

A very magical animated film, but when compared to the rest of Disney's films, it's annoyingly overrated.

This ranks up there with some of my favorite Disney films - and the main reason is that it feels like "classic" Disney again - the music especially - and it balances heart with humor - with memorable characters to boot. It also rivals anything PIxar has put up in the last few years. This is a superb family film and one that adults and children can enjoy equally. Disney once again proves they are the king when it comes to animation.

Not Bad; but a Little Cold

My feelings on Frozen are mixed. The movie is seemingly the perfect Disney Princess movie, with all of the carefully laid out good messages and role models that parents have been craving lately, but Iâm not quite buying it. The movies plot almost seems a tiny bit too carefully calculated for its own good. The center message is right on about relationships, yet it never fully connects emotionally. Its songs are pretty, but none of them really knock it out of the park. Thereâs nothing really that bad about it, but Iâve watched it three times already, and each time I like it a little bit less.

One of the better songs in the movie, Fixer Upper, Is a humorous song about how Kristoff, Annaâs potential love interest, is a solid romantic option, but sheâll have to âfix him up …

A charming and magical animation film

Iâm frozen now. Cool breeze all around. Storming winter snow and giant snowman in a simple and song a long adventure animation film from the crew who gave us Wreck It Ralph. A smart and alluring animation film. It is bound by a winterâs tale and has a lot to make it simple and steady. The characters are cool, really cool and the songs are a treat. The voice overs by Kristen bell and Idina create wonders. The snow man is really funny. The film has the in bound charm and waves its magic all around. So Frozen is about a young girl to be a queen who is cursed with a freeze touch. Whatever she touches, it freezes. Trouble now! She keeps aloof and there comes her sister to her rescue. But her fear of harming her keeps her always isolated. No matter whatever happens, her younger sister is …

I had no desire to see this movie when I saw the first teaser trailer last year. All the characters looked like the ones from Tangled, and it just seemed like one of those pointless Disney films that everyone was going to end up forgetting about in two weeks.
But then I watched it, and ok, this movie is pretty cute. I hate to admit it, but the songs are really addicting as well, even if they could be a little too "Broadway" at times The first song was on the same level of heartbreaking as the beginning of Up. If the entire movie had just ended with Anna saying "Do you want to build a snowman?" I don't think I would have minded, it was just done so well.
(*spoilers*)
Some things I really liked about this movie:
1 The fact that Anna didn't need a prince to thaw her heart.
2 That …

No posts have been made on this movie yet. Be the first to start talking about Frozen!