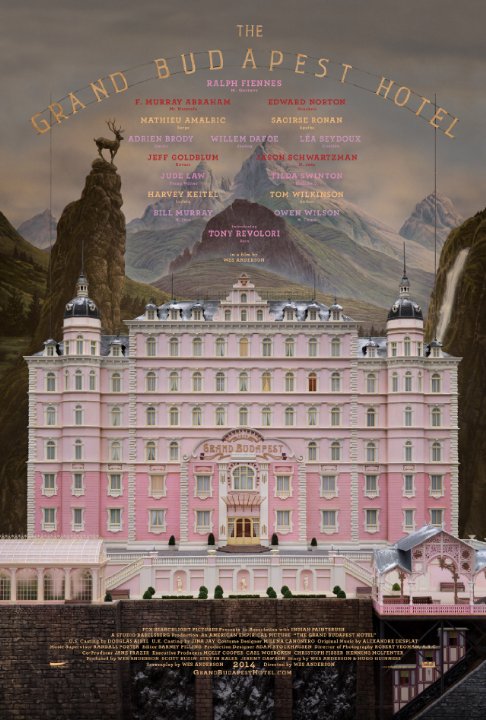 Plot: Between WWI and WWII, Gustave H works as a legendary concierge at one of Europe's finest hotels. During his tenure he creates a life-long friend in a lobby boy, Zero Moustafa. -- Chris Kavan

Near perfect and the most stylish of all of Anderson's films.

The film content is very good the humor very intelligent the photography aside from the special effects must say plenty of them, the cinematography it so simetrical that is not even funny there is not one single diagonal frame or in perspective , I really enjoyed this film given the attention to every single detail . A linear film from beginning to end , it ends where it begins and yet tells the story from the journalist point of view that interacts with the main character.

"The Grand Budapest Hotel" by Yojimbo

An elderly gentleman recounts the tale of how he came to own the venerable but now unfashionable Grand Budapest Hotel. Wes Anderson's films have never quite clicked with me in the past; I have always found them visually attractive yet rather contrived and pretentious. In The Grand Budapest Hotel however, I have finally come - at least in part - to realise the appeal. It has a palpable sense of nostalgia for a bygone era of elegance and splendour combined with a polite civility and quiet courage which is reflected both in the lavish sets and likeable array of kooky characters. The star-studded cast is like a Hollywood who's who, but it is Ralph Fiennes who steals the show and once again shows his talent for comedy. The combination of theatrical sets and lighting with animation gives the …

The Grand Budapest had bountiful memorable lines: "Times have changed." - Older Zero. "oh how the good die young." "There's really no point doing in doing anything in life, because its all over in a blink of an eye." - Mustave "Don't give up." - Zero. Mustave's eclectic character was calculating, perfectionist, eclectic. Only reservations this critic had was the sled sequence since it felt cartoonish and the finale. Screenplay was impressive but it's ending left you hanging, yearning for more. Not one of Anderson's best in terms of rewatachablity but the direction was just extraordinary. The usual casting of Wilson, Norton and Murray were here. Ralph F. was fantastic as always and the boy playing Zero was authentic. The whole film felt like an orchestra with its flawless precision …

I know it's not real but I want to visit Zubrowka

For me, Wes Anderson has always been hit or miss and I have not even seen many of his movies. They were undeniably well made and the acting is always great but Anderson almost always ends up piling to much snark and style for there to be any sense of sincerity to his movies.
Here, his brand of humor and style of filmmaking perfectly compliment each other without ruining the romance and intrigue associated with the different genres that are mashed together in The Grand Budapest Hotel. It's a murder mystery, a buddy movie, a historical drama, film noir, memoir adaptations, and political satire all rolled into one gloriously entertaining film that ranks as one of 2014's absolute best films.
The all-star cast is excellent, especially Ralph Fiennes as the flamboyant and impeccably …

No posts have been made on this movie yet. Be the first to start talking about The Grand Budapest Hotel!