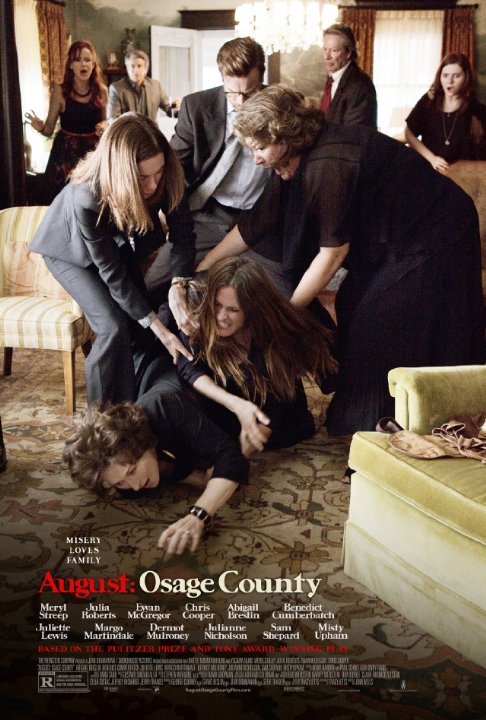 Plot: The women of the Weston family have always been headstrong - even as their lives took much different paths. A family crisis brings them back to the Midwest home where they were raised, and the dysfunctional mother they left behind. -- Chris Kavan

Wonderful performances by the cast with special mention to, of course, Meryl Streep, Julia Roberts and Benedict Cumberbatch. I also like how their stories are so f*cked up and twisted which makes the film overly interesting to watch. I think this film could have been better and snatch awards with better direction and cinematography. The directors surely didn't know how to capture great acting by very good actresses.

'August: Osage County' is the latest film adaptation of a Tracy Letts stage play. An assemblage of terrific actors come together to form a broken family. Though, 'broken' may be too light in describing the utter disfunction going on here. It's not the 'fix all our problems and find a means to love' type of story. I very much like that fact. Not all wounds can be mended, especially when a family harbors this much distaste for it's own members. There exists some great dramatic moments spliced with stinging comedy. The lack of any reconciliation makes for a unconventional, yet satisfying end.

The story is about a women of the Weston family have always been headstrong - even as their lives took much different paths. A family crisis brings them back to the Midwest home where they were raised, and the dysfunctional mother they left behind. Meryl Streep and Julia Roberts do well in they roles but the movie lacks on everything like the plot and the slow paste.

Dysfunctional family doesn't even cover it.

Painfully funny but more often just downright painful. Anyone going into AUGUST: OSAGE COUNTY expecting a comedy as it has been advertised will be given a rude awakening. This is the ultimate feel bad movie of the year (no wonder they pushed the original release date on christmas day to january.) With a cast featuring such wonderful actors as Meryl Streep, Julia Roberts (in one of her very best performances) Chris Cooper (whose really the only redeeming character of the bunch, save for Cumberbatch and the wonderful Julianne Nicholson.) The very missed Juliette Lewis. As well as Ewan McGregor showing an intensity rarely seen, and even Abigail Breslin is heartbreaking in a pivotal moment. This is a film of fights, arguments, bitter family truths and lies, and while at …

No posts have been made on this movie yet. Be the first to start talking about August: Osage County!