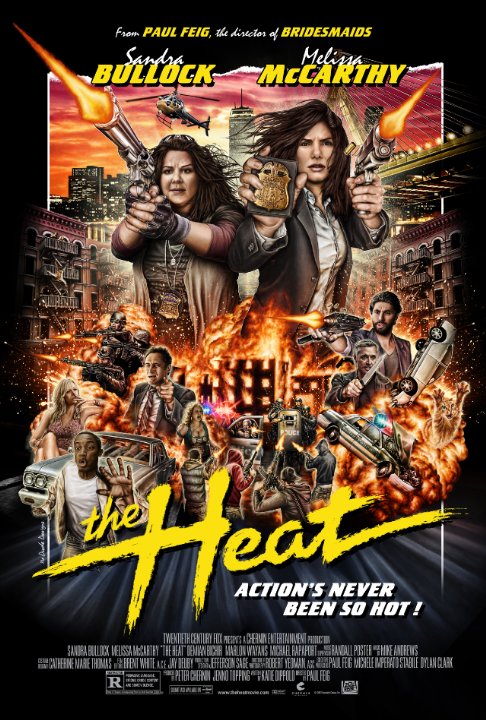 Plot: A by-the-books FBI agent must team up with a hot-headed Boston cop in order to bring down a dangerous drug lord. The only problem is the two women have never had a partner, nor even a true friend in their lives, and must somehow make their incompatible personalities work. -- Chris Kavan

It's all been seen before, but it's still outrageously funny.

A by-the-books FBI agent must team up with a hot-headed Boston cop in order to bring down a dangerous drug lord. The only problem is the two women have never had a partner, nor even a true friend in their lives, and must somehow make their incompatible personalities work. this movie was actually pretty funny.I mean bullock and McCarthy work well together in this movie.

First we have the clumsy FBI agent Sarah Ashburn. I was wondering how the hell she achieved to get in the FBI in the first place.She's a human walking encyclopedia who isn't capable of speaking one obscene word, but in a glance at a crime scene she magically reveals illegal weapons hidden behind a panel and some drugs under the table. David Copperfield is a loser compared to her.
And then we have the street-cop Shannon Mullins who rumbles around foaming with rage and swearing like a heretic while swinging around ferociously. The only positive thing you can say about her is her practical knowledge of the street.
These two opposites are (of course) forced to work together. And after the known obstacles and mistakes, the hate and antipathy disappear by itself as the film progresses. …

"I know its not fair." FBI Special Agent Sarah Ashburn (Bullock) is partnered with a foul mouthed skilled cop in Shannon Mullins (McCarthy). Lacks sufficient background for the antagonists and the plot twist wasn't that surprising. Had some over the top sequences such as the first scene of Mullins making an arrest, violence in general from Mullins, the bar sequence, and more. On a positive note, the leads had good onscreen chemistry, had some really hilarious lines and Melissa McCarthyâs impressive showing. She really brought her A game and Bullock seems to be used to comedy ever since it really looks natural. McCarthy is plain funny and really reminds this critic of a female version of Chris Farley. Just a comic genius at work in this picture. Watching her is enough reason to …

wish it was funny

Bridesmaids has become a big deal over the last few years. Both critics and audiences loved it and its popularity on DVD has only grown since then. Everyone seems to agree that Bridesmaids is awesome.

Everyone, that is, Except for me.

I donât know why, but I just didnât find Bridesmaids funny. It had slap stick and crude humor, two things I usually find funny, but he movie only made me laugh a couple of times. The Heat which has the same director, Paul Fieg, and star Melissa McCarthy, one of the Bridesmaids stars, is even less funny to me. It has all of the elements of a funny movie, but not once during the entire picture did I laugh, not once. Other people seem to find Paul Fiegâs movies funny, but not me.

In a world filled with bro-mances, itâs about time we had …

No posts have been made on this movie yet. Be the first to start talking about The Heat!