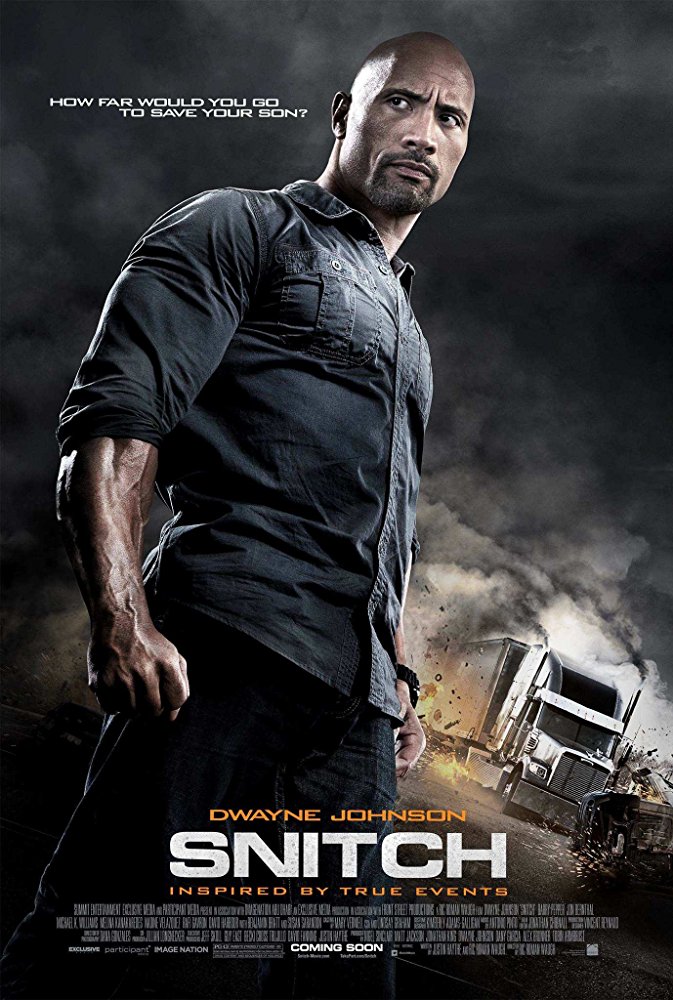 Plot: In order to save his son who has taken the fall for a drug deal gone bad, a father will go undercover for the DEA and do whatever it takes to clear his name. -- Chris Kavan

Okay the word snitch makes me think of the snitch ball from harry potter. In order to save his son who has taken the fall for a drug deal gone bad, a father will go undercover for the DEA and do whatever it takes to clear his name. This movie was okay I mean the movie wasn't bad and it wasn't good but it's okay.

I really liked this movie. It's about redemption and forgiveness. It has a great plot.

Snitch is another Dwayne experiment

Directed by Ric Roman Waugh
Starring Dwayne Johnson, Susan Sarandon
2/4
What one expects from a combo of Ric Roman Waugh and Dwayne âThe Rockâ Johnson (Action director+ Action star)? Total mindless action. Snitch is an easy joke for the combination. No action, only dialogs and lame excuse of ending the film with an action scene that fails to pack a punch. Even the undeniable presence of Dwayne Johnson could not take a level high. For one particular reason, Dwayne is testing himself as a family man again (a father of a son) keeping action as a side step. This may be different for him, but for his hardcore fans out there. Come on where is the action! Dwayne. You disappointed me again. Ric Waugh, who has great credits to him as an action supervisor for many biggies in Hollywood, …

Who Wins the War on Drugs?

When I think of Dwayne Johnson, it's usually all bulging muscles and punching people. What I remember from the Snitch previews - this was built as yet another action movie, but, despite a few decent action sequences, this is really a character-driving film. And, I'm happy to say, Johnson delivers when a role requires emotion rather than just brute force.

The film is directed by Ric Roman Waugh - who is no stranger to the crime/thriller/drama having helmed the 2008 film, Felon. In this case the story is about two sides of the same coin: drug cartels and the danger they represent and the DEA - and the seemingly barbaric tactics they will use to put just about anyone behind bars. In this case, it happens to be Jason Collins - a young man who signs a package from a friend - a big bag of …

When unknown directors such as Ric Roman Waugh want me to watch anymore of their films they may want to start with a blockbuster...not a dud. So many times Dwayne Johnson has accepted garbage scripts and it is such a waste and makes his acting abilities seem almost mediocre. Snitch had a good premise as Johnson portrays father and construction company owner John Matthews who is seperated from his wife and only son Jason (Rafi Gavron) The movie starts off as Jason agrees over a Skyoe conversation with a freind to hold on too a package for a day and he will make some major cash. Jason reluctantly agrees and when the package arrives all hell breaks loose as under the drugs is a police tracer. Seconds only progress as the dorrs to his home get busted down by dea officers. Jason has …

No posts have been made on this movie yet. Be the first to start talking about Snitch!