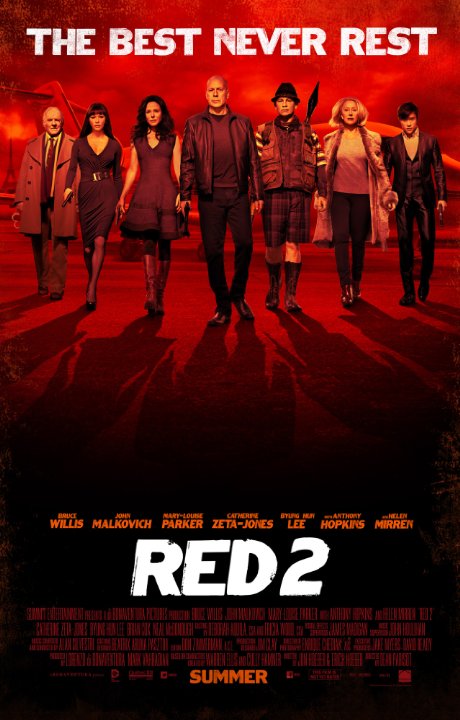 Plot: Frank Moses must bring his distinctly old-school team back together for a globe-trotting missions when a portable nuclear device goes missing. Facing relentless assassins, deadly terrorists and power-hungry government officials the out-manned, and out-gunned team will have to use their wits and experience to protect the world - and save their skin. -- Chris Kavan

It was pretty much exactly like the first one, except this one had Anthony Hopkins in it. lol.

Frank and Marvin are targeted for assassination when a document appears online implicating them in a secret plot to smuggle a nuclear device into Russia during the Cold War.

RED 2 begins pretty much where the original left off as a one idea, one note film; namely that the action men and women are quite old. Thankfully as the story trundles on it adds more spice and colour in the shape of Byung-Hun Lee - the Korean star who provides all of the best action sequences - and Antony Hopkins' affable maniac who is always fun when he is on screen. Otherwise it's a similar cocktail of geezers with guns that resembles a geriatric Mission: Impossible.

It's still a one joke, one note film but the finale is done with enough humour and panache to make up for its more workmanlike moments and …

Second Verse as Good as the First

The reason I found Red 2 to be just as enjoyable as the original film is because, once again, everyone involved looks like they're having a lot of fun. The film delivers the right mix of humor and action - and with this mix of actors (veterans and newcomers alike) it works exceedingly well - even moreso for sequel.

Once again we follow Frank Moses (Bruce Willis) a dangerous operative now trying to live a normal life with his new wife Sarah (Mary-Louise Parker) - who is looking for anything but a normal life, wanting in on some of the intrigue and danger that Moses is well-known for. Fortunately the slightly unhinged Marvin (the always wonderful John Malkovich) sniffs out a new plot... moments before his vehicle explodes.

It seems a leaked document that mentions the top secret …

Okay sequel isn't as good as the original

RED is one of the better straight up old school action movies to come out in recent years, and I for one was pretty excited about the sequel (obviously Iâm the only person who was excited, the movie so far is failing to match the gross of itâs predecessor.) while itâs still a lot of fun to watch the characters from the first RED get back together and have an adventure, it canât quite recreate the magic of the original.

While the plot of the first RED was beautiful in its simplicity, the plot of RED 2 is overly complicated, and dosnât really provide the run-time to make it all make sense.

The film does a good job of moving forward with the main couples relationships and provides good action. Unfortunately the movie moves so fast that the audience isnât given a chance …

No posts have been made on this movie yet. Be the first to start talking about Red 2!