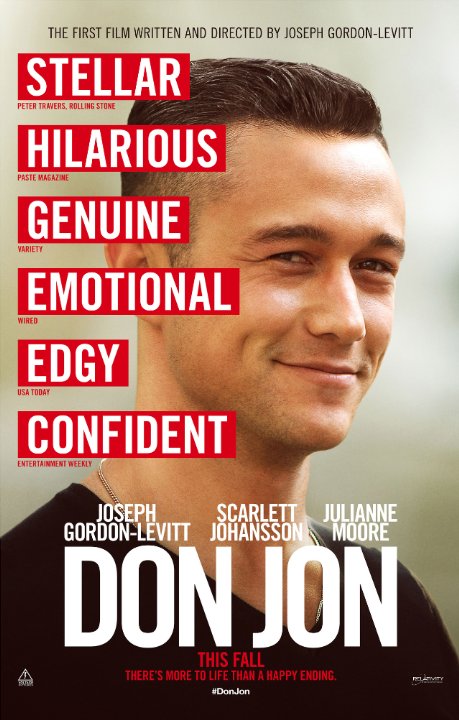 Plot: A New Jersey man objectifies everything around him - from his family to his car to the various women he enjoys wild flings with. But Don Jon, as his friends call him, finds the most blissful experience in life are spend alone, watching pornography. In a quest to finally find a gratifying sex life, two women will help teach him about life and love. -- Chris Kavan

The characters feel real and don't react the way you'd expect them to, and that gives the movie edge. While not the most impressive of Joseph Gordon-Levitt's films, his character is probably my favorite of all of his roles, and he and Scarlett Johansson have excellent chemistry.

Who Can Stop Don Jon?

If the notion that a true connection can break an addictâs dependence upon pornography (true meaning based on a deeper level of intimacy than just merely sexual), Don Jon is an intriguing exploration of …

Just when I thought a romantic comedy couldn't be philosophical.

The fact that Joseph Gordon-Levitt is a natural writing and directing talent is embodied in his debut film wholeheartedly. I say that because I don't think there is a single moment where his writing seems unnatural or where a character isn't reminiscent of a type of person you may encounter outside of a 90-minute film.

The film is very subjective. It is funny, but I bet if you went to see this film one evening while drunk, you would most likely leave the theater left cold. It's much more than a tale of a man addicted to pornography who tries to get over it with the help of two women.
It's writing that makes you think about behavior. It's a screenplay which does not reveal much, but it is excellent at pulling you into …

Joseph Gordon-Levitt makes his directing debut with Don Jon, a funny, charming, fast-paced little film that showcases some of the greatest talents possessed by the actors involved. The performances here are absolutely tremendous, especially from Scarlett Johansson whose accent is spot-on. If you're turned off by the slightly lurid story, you'll easily admire the performances and Levitt's script as they both sparkle with clarity and wit. I enjoyed the comedy aspect of the film and the journey of Levitt's character through his uncontrollable addiction to pornography. However it's really Levitt's (as a director) mindset on the media and how it basically controls peoples needs and sex lives which really makes this film shine. Levitt's character loves porn, expecting real sex to relate to …

No posts have been made on this movie yet. Be the first to start talking about Don Jon!