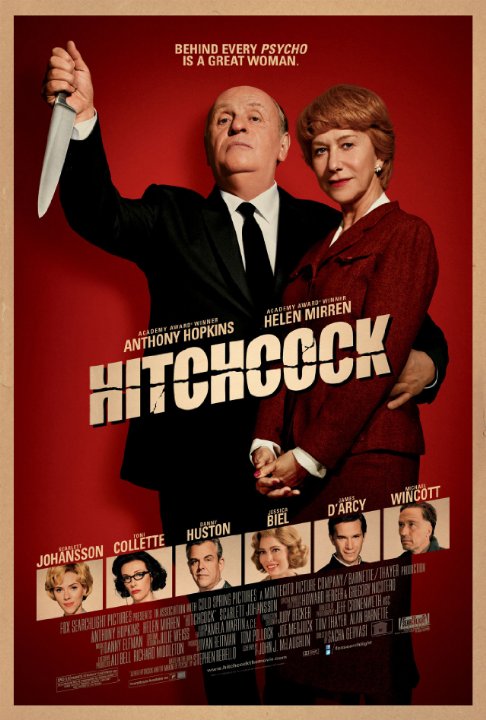 Plot: Explores the relationship between director Alfred Hitchcock and his wife Alma Reville during the making of his landmark horror film Psycho in 1959. -- Chris Kavan

It's not the strongest or most memorable biopic, but its leading performances more than make up for it.

A watchable film about a classic film. Decently good but knowing this is a film about Alfred Hitchcock, the creators should have been more risky when it comes to technique and style. Very good performances by the cast though.

This was so BORING! It is a tragic irony that a movie about a film director world famous for not relying on cliches is totally reliant on cliches. Here we find that that *GASP* his marriage is not working, his wife is underappreciated, there's a younger man after her, no one wants to help him make his movie, he fights with his wife, a young pretty lady understands him, blah blah blah. Granted, the stuff about the studio's hesitance to make the classic movie Psycho is interesting but that's only a footnote in this two hour turd.

A biographical drama on The Master of Suspense. It focuses on legendary director Alfred Hitchcock and his wife Alma Reville during the production and history of Psycho. Surely Hopkins did his research with Hitchcock's mannerisms and speech patterns while Mirren was very sincere. Having a copy of Psycho this reviewer knows most of the scenes based on the short documentary, but it was such a treat to find out more about the enigmatic director's personal life. In effect, the disclaimer and famous murder scene were done with justice. One funny line this rater recall was "Hope it's not going to be another Vertigo." which ironically becomes a classic after a few years and one of this critics favorites. Only set-backs were the make-up and lack of details with the directors films unlike …

Hitchcock (2012) Alfred Hitchcock (Anthony Hopkins) feels that, at 60 years old, he is unappreciated and that others think of him as over-the-hill. So, Hitchcock decides to make a movie, at the reluctant urging of his wife, Alma (Helen Mirren), using his own money â a little film called, âPsycho.â While this film is about the making of Psycho, itâs really a love story between Alfred and Alma. Hopkins is perfect as Hitchcock and gets his voice and his mannerisms down to perfection, and Mirren is amazing in the role of the woman behind the man. Scarlett Johansson does a brilliant job of portraying one of the big stars of the time, Janet Leigh. You wonât learn much about filmmaking when you watch this film, but you will learn a lot about the man named, Hitchcock. My Rating: …

We All Go a Little Mad Sometimes

It's a rare year where there are not just one, but two great biopics that not only impress, but give you insight into your subject. I truly thought that there wouldn't be anything that could approach Daniel-Day Lewis' performance in Lincoln, but I was wrong. Anthony Hopkins should easily be put in the same category as he not only brings the famed director Alfred Hitchcock to life - he truly embodies the Master of Suspense.

Although this film, much like Lincoln, only covers a small portion in the man's life (in this case, the making of the film Psycho) you really get a clear picture of the man. Whether he's sneaking drinks whenever he gets a chance, his obsession over leading ladies or his relationship with wife/collaborator Alma Reville - this is man that is larger than life (in more …

No posts have been made on this movie yet. Be the first to start talking about Hitchcock!