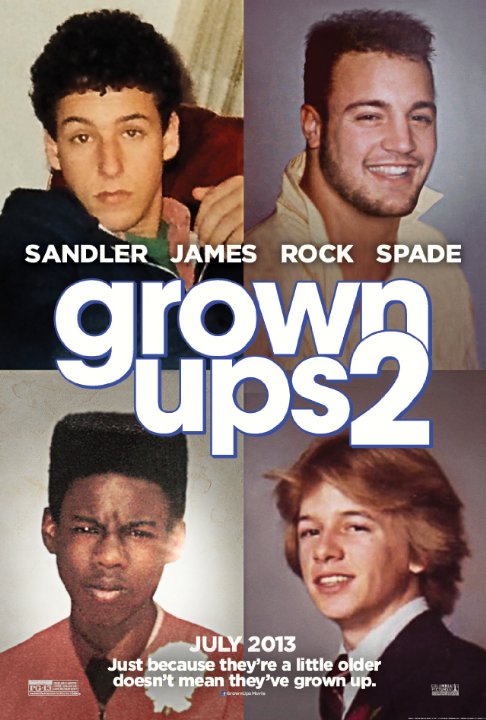 Plot: Lenny has decided home is where the heart is - and so relocates back to his home town where he and his friends grew up. But this time the lessons will be learned by the adults on the one of the most unpredictable times: the last day of school. -- Chris Kavan

Sloppy and without much inspiration, there was absolutely no need for this sequel.

I've managed to avoid Sandler's most recent cinematic blunders, until now. The basic conceit of this movie is to slap together a bunch of terrible jokes and have them be performed by 'comedic' actors who aren't funny. That's it. There is no story to this turd. Every scene exists to setup horribly made jokes that are dumb, crass, obvious, and elementary to the absolute highest degree. It's quite painful to know that actual grown ups made a movie this low and inept. I'm SHOCKED at the staggering level of unfunny this movie reaches. 'Grown Ups' is a total GROAN from beginning to end. One of the worst movies I've seen in a long while.

This movie made more money then Pacific Rim Okay to the people that paid to see this movie is not very clever. Lenny has decided home is where the heart is - and so relocates back to his home town where he and his friends grew up. But this time the lessons will be learned by the adults on the one of the most unpredictable times: the last day of school. this movie is more painful to watch then the first one. I mean the Jokes are just slapstick rubbish.

Starring Adam sandler and a host of other famous faces this is the sequel to grown ups.
This is a crazy comedy that never lets up on trying to get a laugh. where the first movie grown ups had a story and a beginning middle and end. this one seems like someone thought op every comedy senariio then filled a movie with it. i.e one moment they would be in the park the next in a shop and so on ,
its silly crazy comedy but its fun .. there is far more comedy in this one that the first movie.some of it is cringe comedy i.e not funny but trying to be. but there is plenty of genuine funny moments. and the cast in this is fantastic you couldn't ask for better.
good film well worth watching . its ideal entertainment. to make you smile laugh and cringe .

Most Disappointing Sequels by The WHB

No posts have been made on this movie yet. Be the first to start talking about Grown Ups 2!