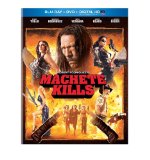 Plot: Machete is recruited by the U.S. government in order to become a one-man army against a Mexican drug cartel leader and power-hungry billionaire arms dealer looking to wage their own global war by taking control of a space-based weapon. -- Chris Kavan

Despite the great casting the film does not carry the comedy intended , it does has great moments . I believe the writing has some flaws , also Danny Trejo is not a comedian nor was Charles Bronson as well Danny is the ugly hero and Charles was the ugly hero . Danny De Vito side kicked with Arnold and carried the film because Arnold is not a comedian actor is an action presence actor . Danny is far better as a bad ass character , it was a good idea to shift from action to comedy but did not work many times the film was predictable and that is not "motion pictures" that is Television only.

The first one was way better. Plot felt prolonged by the number of cameos and the ending just was unsatisfying. It was painful to see Michelle Rodriguez' character **spoiler: get killed with such a brief onscreen presence.** The action as always was present the rockin music added but overall it felt empty. It lacked a certain spark and interesting story which was found in Machete. For fans of Machete/R. Rodrguez and Trejo. this could be a treat since it had more action and gruesome scenes.

Machete kills the squeal but not very well at the box office. This movie was enjoyable but really stupid at times with it's silly action scenes and over the top acting.

The Joke Has Already Run Thin

I felt the first 'Machete' got off track from what it's original 'fake' trailer promised, but I still found things to like about it. The same can be said for this sequel. The only difference here is that the fun is lost through re-tread. The story ditches a couple minor complaints I had with the first and trades them in for more of that purposeful stupidity. I give it a pass for this reason. The whole movie plays like an ultra-violent, but cartoony, bad James Bond type of adventure. Plenty of pleasingly creative deaths and unforeseen cameos (that get spoiled somewhat by the trailer). The joke is wearing thin, like the addition of another short trailer and complete ending set-up for the next sequel now titled: 'Machete Kills Again... In Space'. Yes, space. There's only so far you …

I appreciated the original Machete because it pretty much followed the trailer (included as an extra before Grindhouse) to the T - and it was an over-the-top love letter to that era of film. It was violent, yet a lot of fun and Robert Rodriguez knew what he was getting into and it was exactly what I was expecting it to be. But we were promised two more Machete films - Machete Kills and Machete Kills Again... In Space!

What the sequel lacks compared to the first is a sense of direction - and I know that is hilarious coming from a throwback to a grindhouse film - but despite the many added characters and cameos that abound here, nothing seems to quite come together as well as I would have liked. Picking up where the first film left of, Machete and Sartana (Jessica Alba, in a brief …

No posts have been made on this movie yet. Be the first to start talking about Machete Kills!