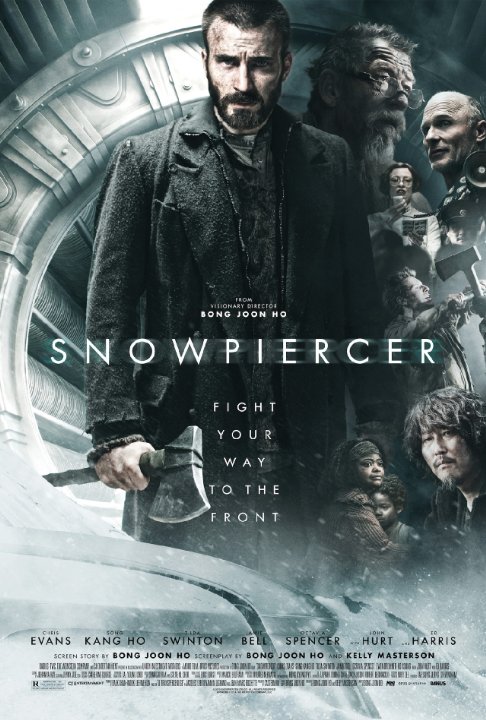 Plot: The near future: a second ice age has wiped out most of humanity. The survivors travel by train through the cold, lonely world - but even here, at humanities end, class division rears its ugly head - and those as the back of the train are ready to revolt. -- Chris Kavan

Don't bother with "Snowpiercer" when you can just watch "Children of Men" from 2006. It's essentially the same movie, but a lot less tedious and conveys its message with more clarity.

Very cool movie. The world is very interesting and fleshed out with cool touches. Some may not like where the story ends up but you'll enjoy the ride

Curtis: "A thousand people in an iron box. No food, no water. After a month we ate the weak. You know what I hate about myself? I know what people tastes like....I know that babies taste best". The story is about a failed global-warming experiment kills off most life on the planet. The final survivors board the SNOWPIERCER, a train that travels around the globe via a perpetual-motion engine. This has to be the most original and the most well directed film that I've seen this year. The action scenes was well shot and Chris Evans was brilliant in this film. The rest of the cast did a excellent job in they roles. Overall Snowpiercer is a awesome movie with a great story.

After an experimental solution to global warming goes horribly wrong, the planet undergoes a new Ice Age and the last vestiges of life on Earth are confined to a self-sustaining train that constantly circles the globe.

In a similar way to High Rise, Snowpiercer is a rather clumsy analogy for class and inequality as the front of the train contains the decadent and over-privileged few while the squalid rear holds the underclass who suffer at the hands of the rule-enforcing middle. Inevitably revolution brews and a suitably intense Chris Evans leads the people forward in an attempt to address the injustices of the system. While the rabble locks horns with the fascistic police force who oppress them, the usual sci-fi standards kick in as the roots and causes of their situation are …

Snowpiercer is a Supertrain for Sure

Joon-ho Bong essentially turns a tired trope (the post-apocalyptic future) on its head in a wonderful, wicked and semi-serious tale of a future in which to prevent global warming, we bring on a second ice age and the remnants of mankind now reside on a trans-continental train with a perpetual engine. The haves live in luxury in the front - complete with dental care, schools, sushi, rave clubs, meat and all manner of amenities. Those in the back subsist on protein bars (believe me, you do NOT want to know what's in them) - which is a step up from cannibalism. Tilda Swinton is excellent (and nearly unrecognizable) as the front-train representative forced to deal with the dregs while Chris Evans is fine as the back-train resistance leader. Turns from Ed Harris, John Hurt and Korean actors …

Alison Pill has a cameo playing a pregnant teacher wielding a machine gun that is knifed in the heart after leading a trippy singalong.

That is but one of the flat-out bizarre and off-the-wall moments that happen in Snowpiercer, a very very strange but furious blend of sci-fi dystopia, social commentary, and balls-to-the-wall action.
Economically filmed and directed in a restrained manner that is refreshing compared to most Hollywood action films, the script moves from point A to point B but it's never the same in each train car as a long-simmering rebellion explodes in the tail section (led by Chris Evans) and makes its way to an intense climax.
The cast is excellent, especially Chris Evans and his primary antagonist played by an unrecognizable Tilda Swinton. There's more …

saw it a few months back. very good film and looks fantasticok the woman in charge is silly and some of the scenes is like walking into a weird world of sillyness but overall its so original and just has a real quality to it.good fim great director

I thought it would be cheesy and stupid, but it was mind blowing.

Looks good to me too. I'll be sure to check it out if it comes to town. (Ps. Lol &quot;Harvey Scissorhands.&quot;)

The buzz on this one is terrific right now - luckily I think it survived good ole &quot;Harvey Scissorhands&quot; and has survived mostly intact. If it actually plays in my area, I would certainly check it out - but likely I'll have to wait for home viewing. And yes, Joon-ho Bong is an excellent director (form his films I have seen) and I highly recommend his work.

Man, I could not be more excited about this movie. &amp;nbsp;Definitely need to check out the director's other movies