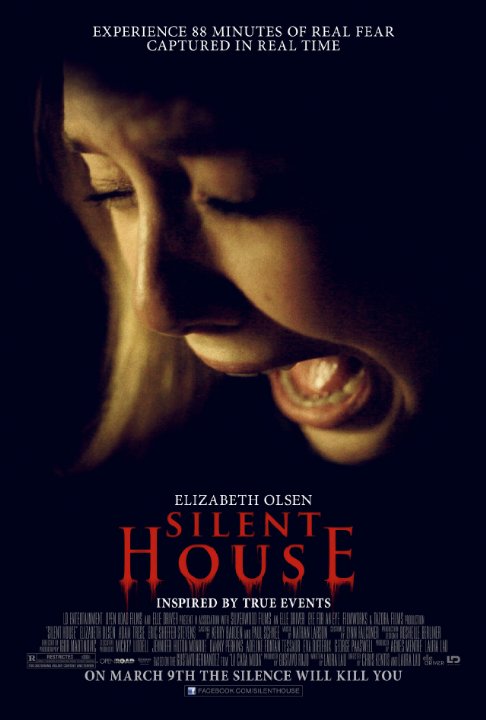 Plot: A young women visits her family's lakeside house only to find herself unable to leave and finds herself descending into madness - remake of La casa muda. -- Chris Kavan

The movie is about a young women visits her family's lakeside house only to find herself unable to leave and finds herself descending into madness - remake of La casa muda. When I first watched this film it was so cliche and I was sick and tried of all the stupid cliches that we got in the past but the twist in the movie actually worked and didn't fail like other horror films.

I only award this two stars based on the performance of Elizabeth Olsen - she has talent, for sure, but is trapped in a film that moves too slow and tries to throw in too many cliched twists to make things right.

So this movie really disappointed me. I was looking forward to a horror film without paranormal/hallucinations. The ending was extremely disappointing. Didn't like this film at all. Elizabeth Olsen was a very good actress though I have to admit. Her facial expressions were very good. The middle was good i thought but that was also because I thought there was an actual murderer in the house. Once again, the ending sucked ass. Don't recommend.

Silent House improves upon the original in every way.. Expert;y edited as one long tracking shot, the suspense is sustained throughout.Elizabeth Olsen delivers another stellar performance after her oscar worthy turn in Martha Marcy May Marlene. This is one remake that is superior to the original in just about every way. I don't understand the hate, as many people have said they prefer the original. I wonder what the reaction would be if this wasn't a remake? Just because it's foreign doesn't mean it always has to be superior to american versions. But who cares, I damn near loved Sustained suspense, gasp inducing moments, and a touch of surrealism. Silent House is one of the best remakes out there, and it doesn't Americanize or tone down the material, it actually makes it far more …

Itâs never a good sign when a filmâs back-story is more interesting that the film itself. âSilent Houseâ, a new release from Open Road Films, is actually a remake of a 2010 Uruguayan Spanish-language horror film that was similarly titled as âThe Silent Houseâ. Both are billed as being inspired by true events (more on that in a bit). Directors Chris Kentis and Laura Lau, the same team that brought us âOpen Waterâ, helm this remake. Much like their earlier film, the main characters here are trapped within their environment and menaced by attackers who are rarely glimpsed.

The key feature of both âSilent Houseâ films is that they were shot as one complete scene. They were also both shot using a hand-held camera, and only ever employ just that one viewing angle (think …

2012: Seen in the Theater by Snoogans

No posts have been made on this movie yet. Be the first to start talking about Silent House!