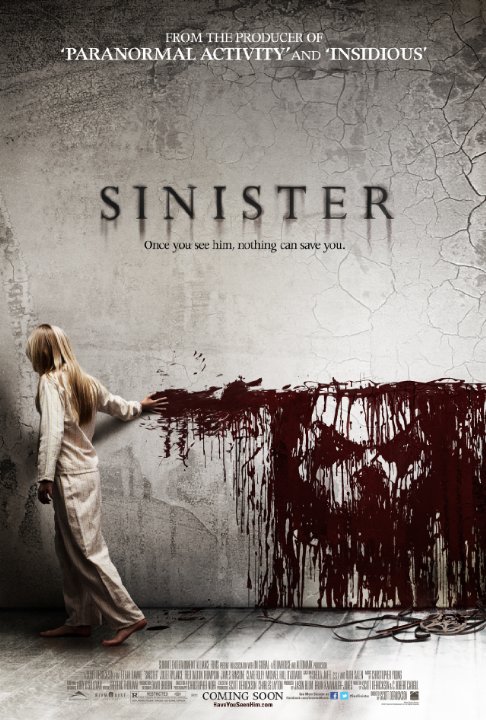 Plot: A true-crime novelist seeks clues behind the murder of the family who inhabited the house he and his family just moved into. Using found footage he begins to unravel the truth, but what he discovers puts his family in danger. -- Chris Kavan

Part of that early 2010s super-serious spooky scary style in US horror, Sinister's probably the best value for money you can get of that era that doesn't have James Wan directly associated with it. The Super 8 films really do unsettle. I was quite impressed with Ethan Hawke, who commits to the psychological downward trajectory of his character in a way that just carries the largely lackadaisical supporting cast towards the shocking, easily-guessable climax.

"Sinister" is a horrifically creepy supernatural thriller that will have you seeing hidden evil spirits in any photograph or old home video you look at afterwards.

The ghost in the movie look's like Jim root. sinister. okay this is going to be a short review for this movie so let's go.the movie is scary as hell I mean the movie it self is creep.

Derrickson does the treatment a mishap. I was never hooked for the film. Just took a try. Literally the cumbersome plot does not make sense. The boogie man is neither haunting nor threatening. Sinister is a wooden spoon according to me. Ethan Hawke is not appealing. He can do really better than this. Derrickson takes the film to the trash.

An aspiring writer along with his family goes for a change from his house. He finds some rare tapes recorded in super 8. The film loses track as it progresses. Then, when things get tight, film lacks focus and gets to the junk yard. The climax is somewhat surprising, and does have a mixed feeling to me. Sinister works only for the video footages of super 8 camera. It has weakness all over. The drama gets boring. The lengthy conversations saturate …

It Leaves a (Sinister) Impression

I consider myself a horror fan, and while I enjoy the whole blood and guys angle now and then, I much prefer the films that are more about atmosphere and digging down into the recesses of your mind rather than some guy in a mask killing indiscriminately. Sinister is one of those films that will get under your skin and linger - and while the payoff is not quite as good as the buildup, it's still one of the best horror films to come out in awhile.

We open on a shot of a family of four, captured on video, as they are hung from a tree. We then join true crime novelist Ellison Oswalt (Ethan Hawke) and his family as they move into a new house. It seems times aren't so good for Oswalt after his runaway first novel, Kentucky Blood, hit it big, he hasn't been able to write a worthy followup …

Trailer is scarier than the actual product!!

I guess seeing this in the theatre up on the big screen would make this more scary then it was (I was priveledged enough to see a home copy that was lent to me by a freind of mine who gets screeners sent to him) However that being said i would have to say over all the film itself was creepy but i guess i dont scare that easily as i only jumped once or twice (Unlike movies like the Paranormal films where you can find me plastered to the ceiling) the scariest thing about this flick was the soundtrack...plan on looking for a copy of this to buy and play on the next Halloween!

I also have to mention that the storyline here was one of the creepiest i have seen in a while... Ethan Hawke portrays true crime novelist Elison Oswalt who after having a run of bad books moves his family of 4 …

Sinister movie is so horror i will watch first time this i must scare.

Early reviews are encouraging, but when it opens nationwide, I'm sure the overall score will drop - but horror films tend to get terrible scores from mainstream critics, which is why I usually ignore them and make my own decision. Hopefully it's worth the price of admission.

Sinister looks cool. Most of the reviews are positive, which I guess is a win, right?

So every year around Halloween, in keeping with tradition, I usually watch a horror film in theaters. The past few years it's been the Paranormal Activity films, but this year I'm thinking Sinister looks like a better choice. The trailers make this look far more interesting than yet another &quot;found footage&quot; film. Anyone else looking forward to something (hopefully) scary for Halloween?