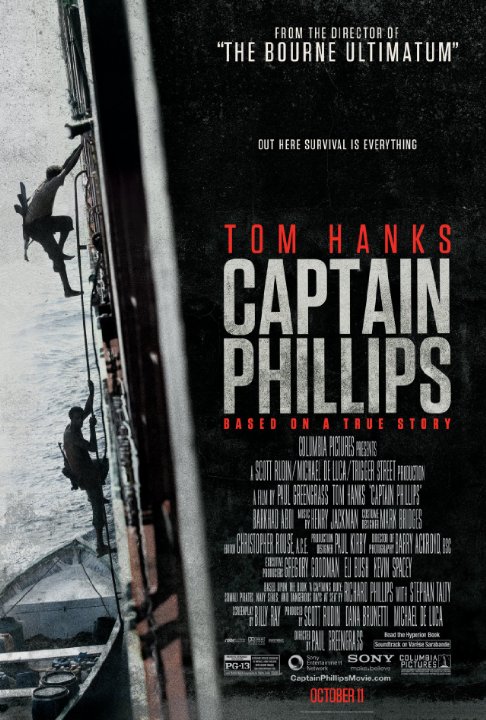 Plot: Based on the true story of US-flagged MV Maersk Alabama, led by Captain Richard Phillips which, in 2009, became the first American cargo ship in 200 years to be hijacked by pirates - in this case, Somali pirates. -- Chris Kavan

Gripping story based on real life events with powerhouse performances from the cast and an intelligent and interesting screenplay.

Tom Hanks plays in his best role in years as Richard Philips, a merchant marine captain who's boat is taken hostage by Somali pirates, and who's bravery helped save many lives. Barkhad Abdi does an unbelievable role as the pirate leader, considering he has never acted before in his life. The film stays very close to the actual events that ended in a classic nail biting showdown.

An American cargo ship is hijacked by Somali pirates provoking a hostage situation and intervention by the might of the U.S. military. This true life story based upon the experiences of Captain Richard Phillips is presented in the pseudo-documentary style that has worked so effectively in the past for director Paul Greengrass and features a typically worthy performance by its star Tom Hanks. The situations are clearly very tense and there is some nice interplay between Hanks and his adversary in the form of Barkhad Abdi whose character is not exactly sympathetic, but the script steers clear of stereotype or demonisation and at least attempts to make the audience think as to why and how his life has led him to this situation. Captain Phillips is a taut and efficient thriller, the true …

A tense thriller from action-captain Greengrass

The captain of this film Mr. Greengrass has got it all right. He drives us into the real adaptation of Captain Phillips hijack scenario played by terrific Hanks and his fellow somalian pirates lead by newbie Abdi. The film as a whole was my pick of the best. I liked every aspect of this film. The story was intense, narrative was gripping, the music was awesome and the cinematography was pin point. The tense moments Greengrass creates after an hour into the movie keeps us waiting for the reaction to come by. The script never relents to go down, rather every move made by Greengrass be it the puzzling action, hard hitting dialogues works really well. I might givc a bit low for the film rather than a full score, because it had a run time of nearly one hundred and thirty minutes. That is way …

Not the Best Movie, But Definitely a Good One.

A true to life story of Captain Richard Phillips who led the US-flagged MV Maersk Alabama which was hijacked by Somali pirates in 2009.

***
I would say that this was an Oscar nominee-worthy film with all its drama and thrill combined. An interesting material with very clean execution of the script. I remember watching in the news about this Somali pirates and I think the movie painted a clear picture to me how a real hijacking went.
At first (about 98% of the film) I was not feeling Tom Hank's portrayal of the character. Until the last scene when ***SPOILER ALERT*** he was rescued and a medic checks him up. He cries and I felt all the sorrow and suffering of the character, the real captain Phillips.
This is definitely a film with heart. All the thrill and suspense end up with a …

No posts have been made on this movie yet. Be the first to start talking about Captain Phillips!