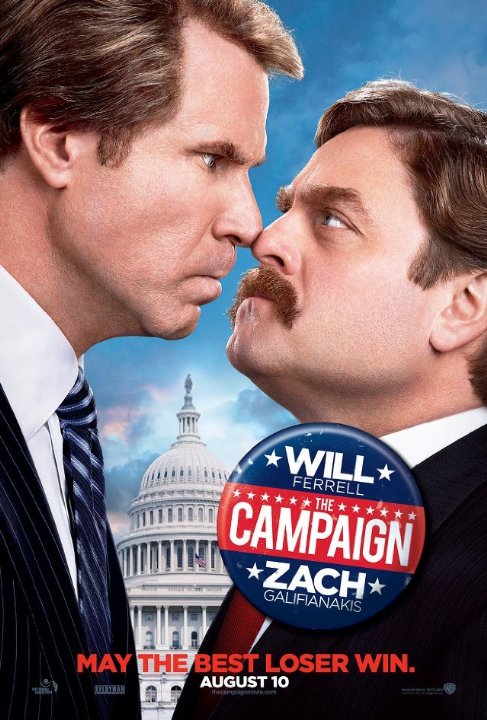 Plot: Long incumbent North Carolina Congressman Cam Brady finds himself embroiled in a dirty political struggle when a pair of corporate sharks, looking to buy their own candidate, turn naive tourist guide Marty Huggins into his rival for the seat. -- Chris Kavan

This movie had some funny part's and I like Zach galifianakis in this movie.

I enjoyed this movie more than I expected. What made the movie great was the style of acting. I think the movie could have gotten out of hand and been a complete mess had Ferrell and Galifinakis come in with their usual outrageous performances. I think it is good that all involved understood that it would have been a mistake to have it be at the same pace as say the Hangover or Anchorman. I also think it is funny that they pretty much poked at the real-life Koch brothers with whatever fake brothers they had. This is worth a watch.

Ferrell sticks to his usual flawed and loud sketch character routine, while Galifianakis tries to create a more uniquely quirky one. There are a decent amount of good laughs here, but it doesn't feel quite up to par with the duo's previous work. I felt the film could've taken a more satirical bite out of politics instead of focusing more on ridiculous antics. However, there is still some slight commentary about greedy politicians and a final message that most of us could agree with.

Congressman Cam Brady (Will Ferrell) runs against Marty Huggins (Zach Galifianakis). The humor was good except for some unbelievable scenes such as punching the baby/dog, putting (or even creating) the sex tape and probably more once viewed. These instances really removes the realism of comedies, no matter how funny it may seem. Direction and pace was fair. Not entirely one of the best comedies, still it entertains. Surprisingly hilarious in most scenes and it shows some range for Galifianakis. Soundtrack was upbeat which makes the film more enjoyable and support solid having Lithgow and Akroyd on-board. The Campaign is a well directed film which touches on dirty politics, lack of family time, father figure, integrity and good/bad leadership.

What a great movie to come out in 2012, but instead of August, they should've waited until November to release it. If you're into politics, you'll surely get all of the references to the current political climate, most notably the Koch brothers of Kansas. In this film, John Lithgow and Dan Aykroyd play the Motch brothers. Who are trying to buy the election when things for the incumbent (Ferrell) go awry.

It's not quite as laugh-out-loud funny as I expected it to be, with both Ferrell and Galifianakis, but it did have some good laughs. It reminded me a lot of Mr. Smith Goes to Washington (1939). In that film the same thing happens, some wealthy men try and put a puppet into Congress, hoping some bad legislation will get passed. That is essentially what happens in this film as …

Will Ferrell films are usually pretty predictable, with Ferrell typically playing an exaggerated version of himself. The Campaign starts similarly, but Ferrell's buffoonish, womanizing congressman is somewhat removed from his usual oafish character - a sneakier and more satire-based comedic creation. The film really gets going with the introduction of Zach Galifianakis's Marty Huggins, a lovable simpleton that steals nearly every scene of the film. The plot is a lot more focused than the usual comedy, with a great deal of unexpected dramatic tension. The film's pleasant surprise is that it gets a fair amount of smart shots in at both sides of the political spectrum and manages to weave these sharper moments in among the raunchier, "dumber," shock moments. In all, it's a fairly …

No posts have been made on this movie yet. Be the first to start talking about The Campaign!