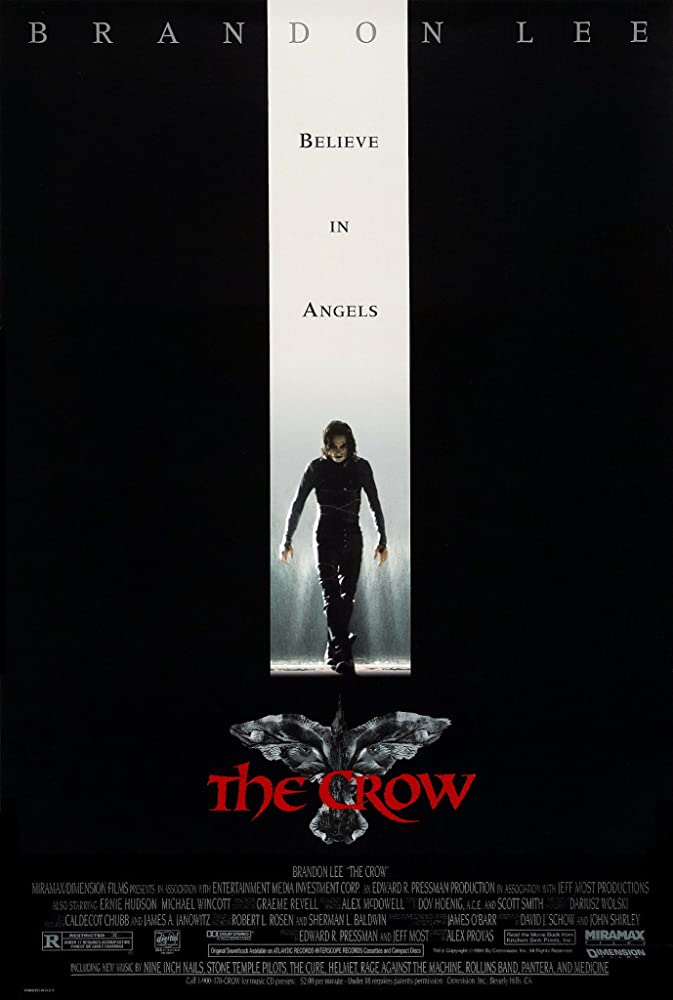 Plot: A man comes back to life after being brutally murdered to kill the people that murdered him and his fiance.

A fast-paced, hyper-violent cult favorite, "The Crow" adds up to a "Death Wish"-style vigilante revenge flick with a supernatural twist, an unexpected amount of humor, and visuals that look like they're from a 90s punk rock music video.

Dark, broding, and edgy comic book film featuring a strong performance by Brandon Lee. Itâs truly tragic what happened to him offcamera. Director Alex Proyasâ depiction of Detroit turns it into a grotesque crime ridden hellhole which even Batman wouldnât venture at nighttime. The ever reliable Michael Wincott is especially memorable as the cruel sadistic gangster Top Dollar.

The story is about a man comes back to life after being brutally murdered to kill the people that murdered him and his fiance. This movie is awesome and dark as well. Brandon Lee role in this film reminds me of heath ledger role in the dark knight as the joker.

This film is probably most notable for being the film that Brandon Lee was filming when he was shot and killed on set, it was an accident, but a great actor is gone none-the-less. This film, visually, looks just like any other somewhat dystopian future flick does. It's always dark, I don't believe the sun ever rises, nuclear war must have blotted out the sun. It's always raining, etc, etc, etc. This film also just screams, "hey, I was made in 1993!" The bands, the music, the hair, everything just has that early 90s look. It's visually stunning and the acting, is slightly over-the-top comic book fare, but really wasn't too bad.

"The Crow" by Yojimbo

A dead rock star returns from the grave to wreak bloody vengeance on the gang who murdered both him and his fiancee. Based on a comic book, The Crow plays out like an adolescent goth's wet dream. The impossibly pretty Brandon Lee, clad in leather and eye liner and sporting an electric guitar, stalks the night taking out evil cartoon characters to a truly dire goth rock soundtrack. The look of the film is very nice with plenty of atmosphere and nice sets in a similar vein to Proyas' Dark City, and Ling Bai, Tony Todd and especially Michael Wincott make for some very charismatic, characterful villains. On the down side, when he's not kicking bad guy ass, Lee's performance is ridiculously affected, the direction is clumsy and although there are a couple of well orchestrated set pieces there …

No posts have been made on this movie yet. Be the first to start talking about The Crow!