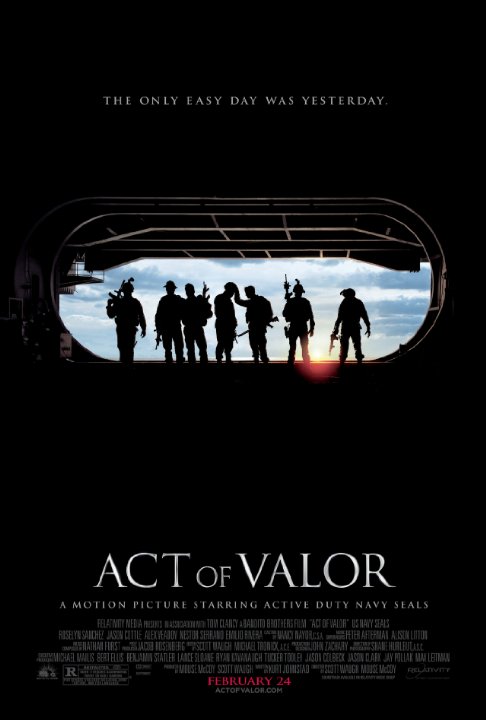 Plot: Inspired by true events and starring an active group of Navy SEALs, Act of Valor follows this elite group of trained soldiers as they mount a cover rescue mission for a kidnapped CIA operative. -- Chris Kavan

What happens when call of duty meet battle field and you will get act of valor. Act of valor is a okay movie, so if your a fan of battlefield you will enjoy this. Good story and some cool scene in the film.

Honestly, this was a pretty weak film. I appreciate the realistic missions and action sequences, but the plot got muddled after a while and the poor acting and mediocre script didn't help.

Although this felt like a cross between the world's most expensive recruitment video and the next Call of Duty game (Tom Clancy was mentioned in the credits), it was still better than I expected. Plenty of action, a decent story and the actual SEALs (while a bit stiff) managed to wring out decent performances. For the war buff in your family.

A suicide bomber kills an American ambassador, his son and other innocent children in the Philippines. CIA agents Walter Ross (Nestor Serrano) is murdered while Morales (Roselyn SÃ¡nchez) was captured and interrogated for questioning. Chief Miller, Lieutenant Rorke and Chief Dave head the Bandito Platoon of SEAL Team Seven to rescue Morales. The score, realistic action and direction were superb. This however is overshadowed by the fact that the acting was not convincing, plot was all over the place and lack of better character build-up. There was a platoon and yet you never know who they really are, only faces in battle. Only real emotion seen was the conclusion.

The antagonist was no real threat, only in terms of his idea. Some lines were good such as: "Love your life, …

No posts have been made on this movie yet. Be the first to start talking about Act of Valor!