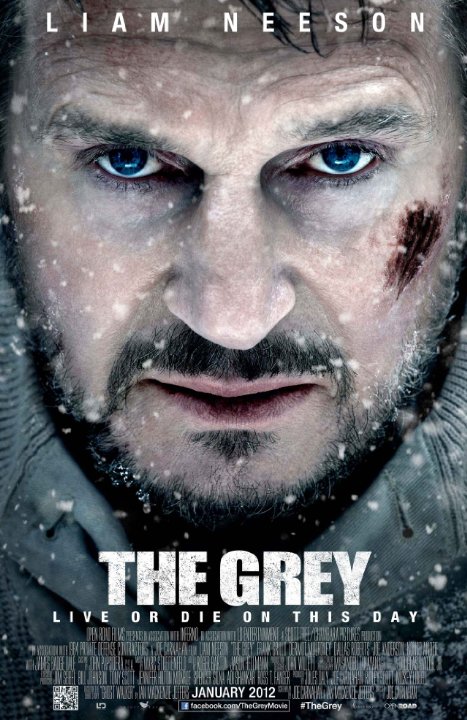 Plot: A plane crash strands a team of oil drillers in the Alaskan wilderness. They must struggle to survive against the elements and a vicious pack of wolves who view these new entities as intruders. -- Chris Kavan

A plane crash strands a team of oil drillers in the Alaskan wilderness. They must struggle to survive against the elements and a vicious pack of wolves who view these new entities as intruders. Okay the grey is a okay movie with good acting and good story. one thing that I don't like about this film is that it's too long and slow.

A plane crash strands a group of oil drillers on icy landscapes where they have to find way to get help and survive the deadly elements and pack of wolves from the woods. *** Indeed, another good thrilling movie with Liam Neeson. It reminded me of the film "The Way Back" only this film was set in a cold Alaskan location with all the cast walking, running, and fighting for survival. With a lot of action and thrilling scenes, also with a good mix of dialogues, this film surely be enjoyed by everyone who are looking for a good watch.

Liam Neeson (and company) vs not only a plane crash and the elements, but really huge freakin' wolves. Despite the premise, this movie actually has quite a bit of emotion going for it. Still, each character only gets just enough development that you feel slight sympathy when they die horribly. Worth watching, but in the end somewhat forgettable.

A passenger plane returning a group of oil workers from a drill camp goes down in the remote Alaskan backcountry. A fortunate few survive the crash, only to have to deal with surviving the elements â and a pack of wolves. The script is derived from the short story âGhost Walkerâ, written by Ian Mackenzie Jeffers. Jeffers shares the screenplay credit with Director Joe Carnahan (âThe A-Teamâ, âSmokinâ Acesâ). The film has a familiar feel to it, initially, making me think of titles like âFlight Of The Phoenixâ or âThe Edgeâ.

Filling out the lead role is Liam Neeson (âTakenâ, âUnknownâ) as John Ottway, a company hired hunter whoâs paid to keep wolves from attacking the drill sites. He initially pens a suicide note to his wife, but upon hearing the howl …

"The Grey" by Yojimbo

In this wilderness adventure that pits man versus nature, hunter Liam Neeson becomes the hunted as he leads a handful of plane crash survivors through the most adverse of conditions while being stalked by a pack of wolves. To be honest, I found the premise to this film to be about as promising as such films starring Troy McClure, but Joe Carnahan at the helm and Neeson's towering presence convinced me to give it a try. Thankfully, The Grey is far from the usual macho chest beating that you see in a lot of wilderness adventures, the director instead showing how man stripped of his technology is little more than one of the beasts he finds himself hunted by. Neeson once again revels in the part of a rough and tough pragmatist and it's nice to hear his native accent again, and although the …

This was one of the most underrated films of the year, and I frankly was incredibly surprised by the films quality. This movie was released in the earliest bits of the year, which is usually a garbage can were studios can dump movies they donât know what to do with. 2012 was no different, but among all the awful horror flicks and un-funny comedies there are movies that are legitimately good, and The Grey was one of those movies. Itâs A Diamond in the rough.

The movie is full of a horrifying sense of hopelessness. The whole time you know that are intrepid adventurers are doomed and that the wolves, animals that have lived in the ice and snow for thousands of years, will inevitably win. This movie is unlikely to have a happy ending, yet despite that it gets you invested in the …

No posts have been made on this movie yet. Be the first to start talking about The Grey!