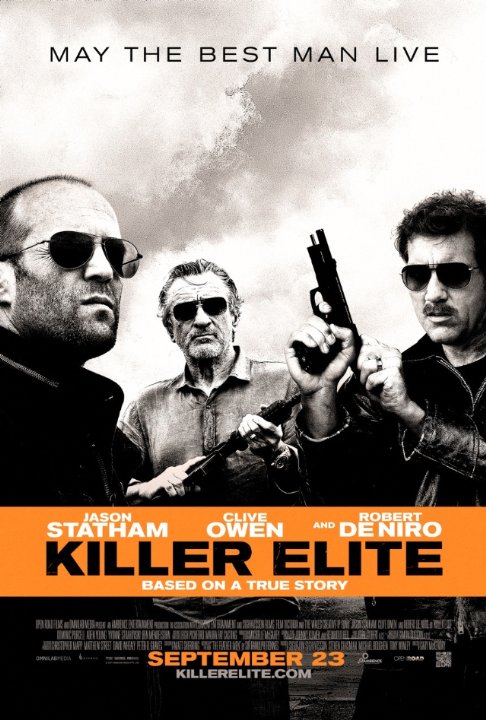 Plot: A former member of Britain's Elite Special Air Service comes out of retirement in order to save his mentor and must face three highly-skilled assassins along the way. -- Chris Kavan

The story is about a former member of Britain's Elite Special Air Service comes out of retirement in order to save his mentor and must face three highly-skilled assassins along the way. This movie has good acting but the film felt a bit eh, I mean the movie lacks on characters and the story wasn't that mind blowing.

When you like a simple story and a lot of action. Rent this one. No surprises here, just action.

Even though a movie is not necessarily bad, sometimes making snarky comments while watching it will make it more entertaining. Killer Elite was that kind of movie for me. At a key point where a third party enters the scene and starts belittling the two spies, all I could think about was, "...he starts MONOLOGUING!" We all know how that pans out. Killer Elite was good with the action and car chases. It did have surprises from time to time, but also included were the eye rolling, sappy love interest scenes. The movie felt thirty minutes too long, but it did not feel disappointing.

A retired black ops killer for hire is pulled back into the business when his friend is held hostage by an oil sheikh seeking retribution against the SAS for assassinating his sons. On the surface of it, Killer Elite is very much an example of business as usual for Jason Statham in what appears to be just another bone-headed but watchably efficient, testosterone-fuelled action thriller. What marks it out from the majority of Statham's action canon is the above par cast and the fact that the implausible plot is actually based on true events. This fact gives the film more credibility than it would have and as so becomes far more interesting. The result is kind of like The Bank Job meets Mission Impossible and thanks to the strong action sequences and watchable stars it's strangely …

Danny (Statham) helps Hunter (De Niro) escape but fails. He is introduced to Sheikh Amr and is asked to kill three former SAS agentsâSteven Harris (Lachy Hulme), Steven Craig, and Simon McCannâfor killing his sons during the Dhofar Rebellion. Spike Logan (Clive Owen) and Danny slug it off. Danny fakes the killings and explains to Spike that there is somebody else who wants his agents killed because of the death of the three eldest sons. Some of the dialogue and action were dicey such as Dannyâs escape on a chair while falling over landing on a van unscathed. Cinematography was radiant showing the sunset of Paris and various locations. Soundtrack and direction was sharp and action and storytelling fast paced. Killer Elite is a good action flick if only the character …

No posts have been made on this movie yet. Be the first to start talking about Killer Elite!