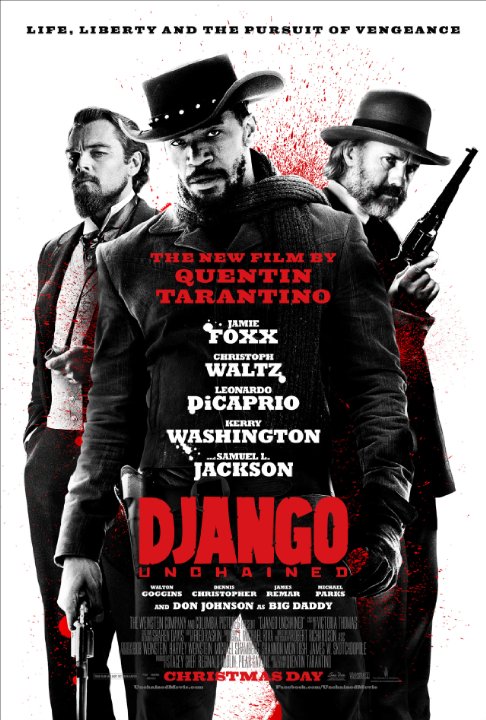 Plot: Once a slave, Django is now a free man working as a bounty hunter. After assisting a German bounty hunter, the two join forces to take down the wicked Plantation owner Calvin Candie - who has Django's wife and wants him back as a slave. -- Chris Kavan

I rather enjoyed this movie and yes I am a Tarantino fan. He did an excellent casting job. All of the characters were so believable. Although slavery is never a happy topic he made it easy to talk about. The "N" word word was used a lot through out the movie so if you have a hard time hearing that word you won't get through the first 15 minutes. It kept my attention the entire time with humor and sometimes disturbing moments. But,overall I rate this movie 5 stars even though only 4 is available here.

best movie of 2012. To the people who does not like the N word then you are not going to have a good time with the movie but the movie is still pretty awesome.

Quentin Tarantino once again delivers the same movie he has been making over and over again for years, this one is set in the southern United States just before the Civil War- but the song remains the same. That is not to say its a bad song, just nothing original. The movie features the expected brutal graphic violence and long dialogue sequences, and of course a complete lack of any sustained action sequences. Also, the constant use of way too modern sounding songs often takes you out of the movie. A straight orchestral score would have greatly enhanced things. That said, the cast is mostly terrific (other then a standard Clint Eastwood style performance from Jamie Foxx), and the movie does hold your interest all the way through its very long running time.

Rescuing a slave to help him track down a trio of outlaws, a German bounty hunter then forms a partnership with him and they set about finding and freeing his wife from servitude. Although it seems like more genre hopping from Quentin Tarantino, this western is really once again an exploitation-based revenge fantasy. But let's face it, one can have little sympathy for both the Nazis of Inglourious Basterds and the sadistic slavers of Django Unchained and so even the most lily-livered and liberal of us can get a cheap thrill out of experiencing some brutal retribution as we watch the down-trodden and exploited rise up to become a total bad-ass! Jamie Foxx is super-cool as a kind of be-stetsoned Shaft and Christophe Waltz is his usual brilliant self whose gentleman killer is the one …

Good to know - I'll be watching this on Sunday and my hopes are high due to the many nominations and great opening numbers for the film. For a change, I don't think I'm going to be disappointed with this one.

Now that my wife is a huge Tarantino fan, I have to wait to get a babysitter!!!! I am dying.

Just found out Jonah Hill is going to have a small part. I love when Tarantino casts out-of-the-ordinary people for movies like this. I am very excited to see what he does with Hill. Adam Sandler was supposed to be the 'Bear Jew' in the bastards, which sadly didn't happen. This will hopefully be just as insane of an idea.

I have been waiting for this movie since I heard of it two years ago. This is going to be another instant classic that will hopefully rival that of 'Inglourious Basterds'. The cast is going to be phenomenal. I am expecting the word out of this one, thankfully Tarantino has not let me down on anything yet.