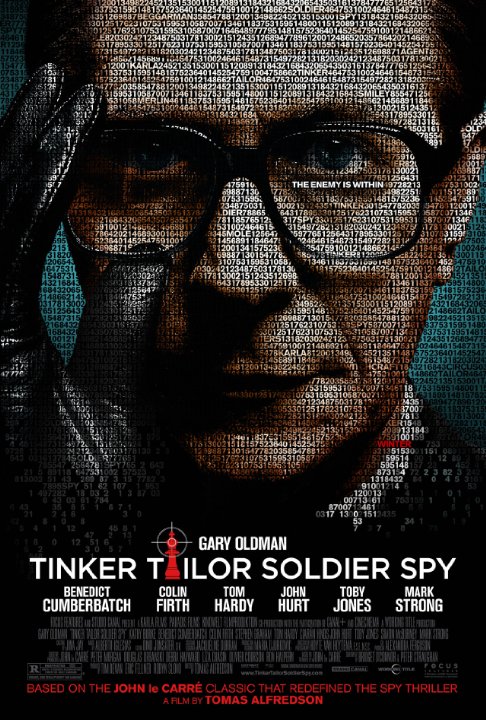 Plot: George Smiley, an expert in espionage, is brought out of semi-retirement during the height of the Cold War in order to sniff out a Soviet agent who has infiltrated the ranks of MI6. -- Chris Kavan

It's superbly shot and well-plotted, but "Tinker Tailor Soldier Spy" has minimal payoff in the end.

Beautifully acted and elegantly shot, but I'm afraid some of the finer details of the intrigue were lost on me.

Wow I did not know that spy's can just do nothing in this movie. Tinker tailor soldier spy is one of the boring movie's of 2011, good acting but just nothing happen's in this film just boring and I don't like boring movies.

An ex spy for MI6 is called out of retirement to uncover a Russian undercover agent in the top echelons of their organisation. The one thing that can be said in favour of Tinker Tailor Soldier Spy is that it reeks of quality. The exceptional ensemble cast present what can only be described as an acting master class and the direction, photography and production design are all top notch. The problem with the film lies with its script, but that's not to say that it's badly written; quite the contrary in fact. The dialogue is smart, the themes sophisticated and characters well drawn. The trouble lies with the fact that this Cold War world of secrecy, back stabbing and betrayal seems so alien in the internet age that it's quite difficult to involve yourself in the dense, convoluted story. I …

So many characters, and yet it revolves around Control (John Hurt) the head of British Intelligence ("the Circus"), George Smiley, "Beggarman" (Gary Oldman), Percy Alleline, "Tinker" (Toby Jones), Bill Haydon, "Tailor" (Colin Firth), and Roy Bland, "Soldier" (CiarÃ¡n Hinds). Oliver Lacon (Simon McBurney) brings Smiley back from retirement to investigate a possible mole in the British Intelligence. The mole has been leaking genuine high-grade British intelligence to Polyakov. Some minor qualms this rater had were the overloaded figures, sluggish start and lack of a better character development. On a positive note, the performances were solid (Oldman was exceptional), score was fantastic and displayed crafty camerawork from the beginning. One of the best lines" "There is nothing …

No posts have been made on this movie yet. Be the first to start talking about Tinker Tailor Soldier Spy!