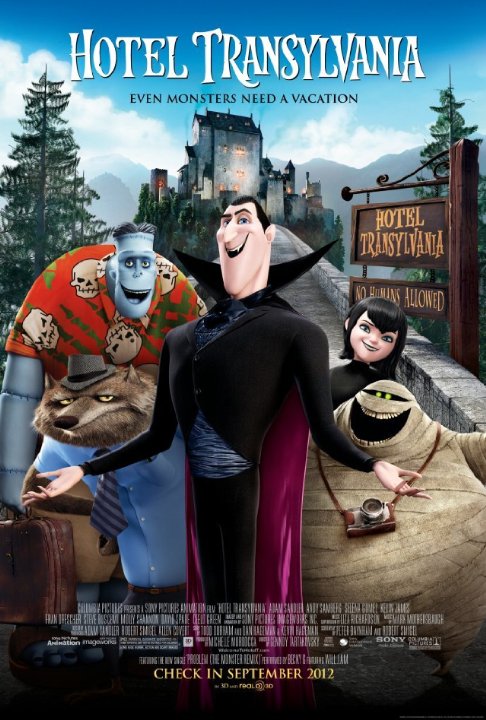 Plot: Dracula runs a motel hidden from the human world for his other monstrous friends. When a boy stumbles upon it, and proceeds to fall in love with the count's daughter, he scrambles to keep his business, and family, together. -- Chris Kavan

I like the fast-paced, overtly cartoony approach here. Not enough animated movies can sustain this type of presentation. Full-on zaniness is always appreciated. However, that visual snap is supported by many routine jokes. There's not much to laugh at beyond some creative body movement and quick throwaway gags. As far as story and character, it's all completely mediocre. Nothing more than harmless entertainment.

Count Dracula (Adam Sandler) is the owner of a 5 star hotel for monsters. He has a daughter named Mavis (Selena Gomez) who falls for a fun human named Jonathan (Andy Samberg). Thin plot, Dracula surviving sunlight and the message of letting go child was the low points. The gags and soundtrack were terrific, nothing groundbreaking or special about the entire film. A family flick for kids which showcases a variety of monsters. It felt like an animated Addam's Family crossed with Monster's Inc. and Dracula films. The monsters were funny enough to bring some laughs while the voice artists provided energy and believability. If only there were more depth to the story. Hotel Transylvania shows how parent's shouldn't lie to keep their kids safe, children should show to their old folks that …

All star vocals make this a winner!

For those of you that are loyal readers of my reviews (I love you all) you will know that i usually watch these kind of films due to my children. However now i am tending to watch alot of these computer animated (The new age cartoons) films on my own as i am really starting to enjoy them. Hotel Transylvania is one of them, my daughter had seen it in it's initial theatrical run and told me she really enjoyed it. To be perfectly honest I didn't have to watch it but I did and it wasn't a bad little family flick I might add.

An all star ensemble of talent lend their voices to this film, however the most recognized voice of the lot belongs to Adam Sandler who voiced for the cheif charector in the film Dracula. Dracula, who lost the love of his life years before and was left a …

No posts have been made on this movie yet. Be the first to start talking about Hotel Transylvania!