The Woman in Black Movie Information 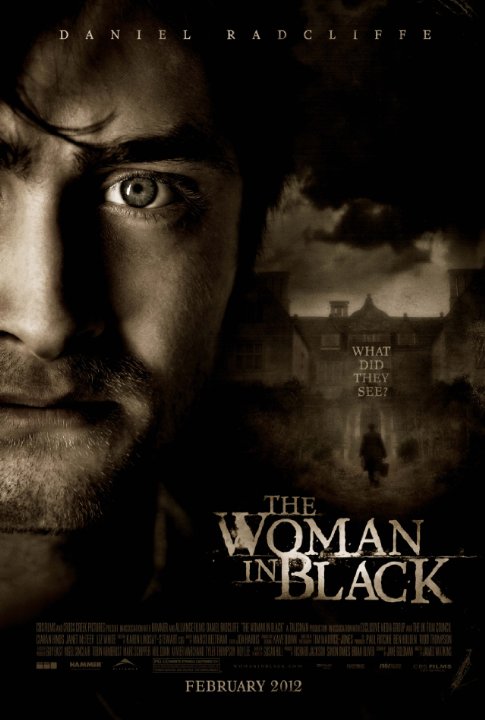 Plot: A young lawyer is sent to a quiet village to settle a recently-deceased client's account when he comes across the ghost of a woman seeking vengeance. -- Chris Kavan

It's ominous atmosphere is backed by Daniel Radcliffe's strict performance.

The story is about a young lawyer is sent to a quiet village to settle a recently-deceased client's account when he comes across the ghost of a woman seeking vengeance. This movie was so scary that I jumped out of my seat. The acting was good and the plot was good and overall I enjoyed this film.

I was shocked at how good this movie was. Dark setting, creepy and spooky vibs throughout. Wonderful first movie out of Harry Potter for Daniel Radcliffe. A must see,,,

The Woman In Black

If âThe Woman In Blackâ [TWIB] is representative of the current standard for horror movies, then that bar has been lowered somewhat by this film. Iâm not saying this movie is really bad, but I did feel it was unremarkable. Apparently the public thought enough of it to make it number two for opening weekend box-office (very close behind the other new film, âChronicleâ); but Iâm predicting it will fade quickly.

The film gives us Daniel Radcliffe as Arthur Kipps, a sullen widower who is down to his last chance at keeping his job with a law firm in early 1900âs London, England. His make-or-break mission is to travel upcountry to settle the affairs of a recently deceased client. Upon reaching his destination, heâs treated with suspicion and outright …

Professor Dumbledore wasn't able to save Harry this time. But I must admit that this ex-magician threw of his wizard robe with panache and passed the test with flying colors. After 5 minutes, I really didn't see him as the Harry anymore.
I don't think this movie should be categorized as a horror, but more as an old-fashioned ghost story like they were made &#8203;&#8203;in earlier years. It's more something like "The Changeling" and consorts. All the classic elements are reflected in this film: the lugubrious face watching from an attic window, the rocking chair, the wet footprints, the toys that start playing on their own, the footsteps in the attic, the candles blowing out suddenly, the long dark corridor and the shadows. All this placed in an "Addams Family"-stylish old building …

"The Woman In Black" by Yojimbo

A lawyer and single parent still grieving the loss of his wife is sent to a country mansion supposedly haunted by a woman who causes the local children to commit suicide. Daniel Radcliffe's first foray into a world beyond Hogwart's is a Gothic ghost story in the tradition of Hammer Horror which takes the now familiar ingredients of J Horror and transposes them to Victorian England. Radcliffe actually makes the transition quite well and the spectre of Potter is soon forgotten as he gives a suitably haunted performance within some nicely atmospheric locations. The biggest problem is that the usual gimmicks of unseen faces at windows, midnight exhumations and occupant free rocking chairs have all been seen so often before it all seems so familiar that there are no surprises at all for such …

No posts have been made on this movie yet. Be the first to start talking about The Woman in Black!