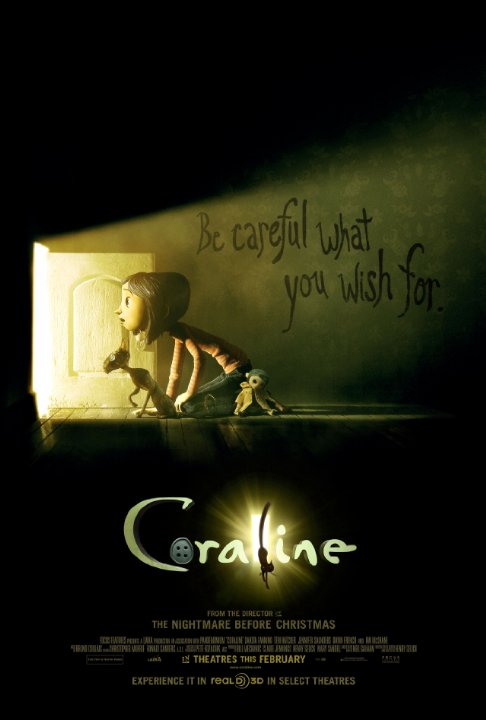 Plot: A young girl discovers a door in her house that leads to a parallel world that on the surface seems better, but beneath the veneer is something sinister and it will take cunning and resourcefulness to get back home and save her real family.

It's not quite as enchanting as "The Nightmare Before Christmas," but that might be setting the bar a little high. It's still very imaginative and beautifully animated.

The film is about a young selfish girl discovers a door in her house that leads to a parallel world that on the surface seems better, but beneath the veneer is something sinister and it will take cunning and resourcefulness to get back home and save her real family. This movie is really scary and I am not kidding you this movie scared me and other people may argee with me. the movie is stop motion and I think stop motion makes everything look creepy.

Coraline was the animation sleeper for 2009, a film that packed a lot of charm and wonder into an underrated package. The story and dark comedy, courtesy of the great Neil Gaiman, are unique and thoroughly well-done. The visuals and direction by Henry Sellick (one of the geniuses behind The Nightmare Before Christmas - though Tim Burton usually gets all the credit) are creative and stick with you long after the film. Coraline is not just a film for children, but pushes back on adults with coming of age themes itself.

I liked this SO much more than I thought I was going to. Granted, I'm in the best mood of my life. Dakota Fanning's voice was killing me for the first 20 minutes or so, but either she got better or I got used to it. It was very imaginative in a Tim Burton-y way, but lacked the snarky self-reflexivity and contrived quirk that I hate about Tim Burton movies. It was "earnest," as my awesome new roommate called it.

I think I felt everything I was supposed to feel. A child's wonder, loneliness, fear, etc. Good job, Coraline. Favorite part: When Teri Hatcher turned into the REAL Teri Hatcher. Incredible. I wonder if that offended her.

The music was cute, too, but very Burton. However, I liked this movie more than any Tim Burton movie I've seen, with the possible exception of Edward …

Nearly sixteen years after the long forgotten and then suddenly remembered again The Nightmare Before Christmas, director Henry Selick released another beautifully filmed stop-motion film: Coraline. He did make James and the Giant Peach and Monkeybone in between those, but nobody seems to remember James and the Giant Peach, and nobody seems to want to remember Monkeybone. Regardless, his fourth major delve into stop-motion animation is one that I both applaud and denounce.

The story is of a girl named Coraline, who has recently moved into a new apartment complex. Rather bored with her new abode, she find a door sealed away behind wallpaper, and decides to go exploring. Inside she find an alternate version of her world in which her parents, her neighbors, and her home are nothing less …

I wanted to see this movie when it came out, finally got the chance renting it. The story is pretty complicated to explain, it's one about a girl named Coraline who has moved into a new house with her family and meets with a ton of colorful to say the least characters in her neighborhood. She manages to enter a world where she meets her Other Mother who she prefers at first but begins to learn about the scary secrets she holds. Storytelling wise, this is probably the best medium between Pan's Labyrinth and Disney's Alice in Wonderland to date, there's appeal for kids and adults, and it's a pretty complicated film with a story to ponder on. Of course if the imagery doesn't look like it will keep you from getting unpleasant dreams at night, then that's pretty much the only reason I can see …

I don't know much about it.&amp;nbsp; Who wrote the book?