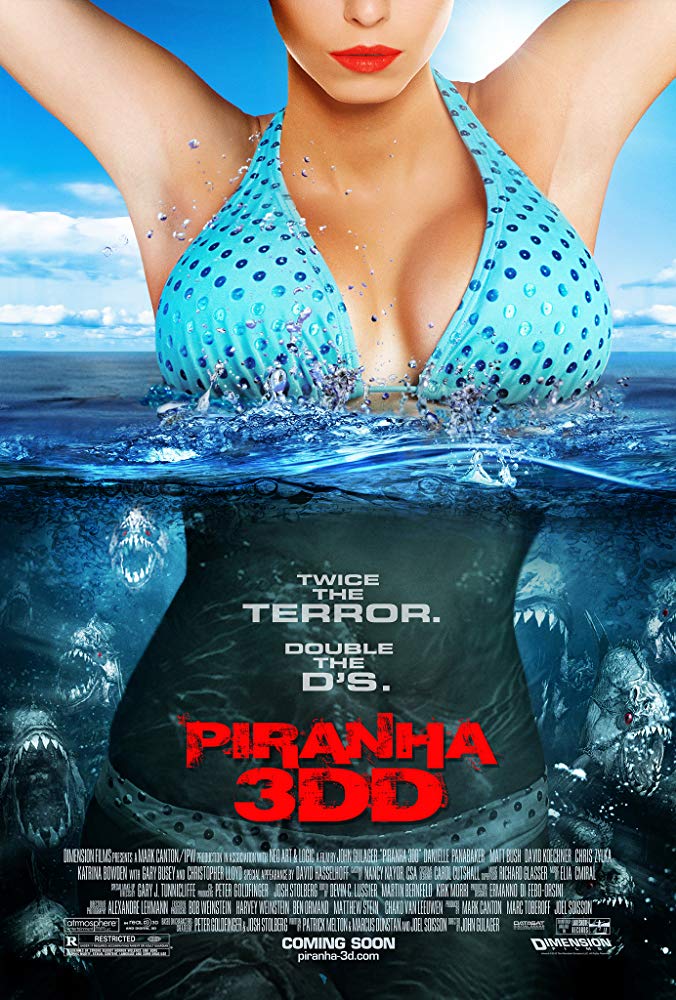 Plot: After ravaging Lake Victoria, a killer swarm of piranha set their sites on a popular water park. -- Chris Kavan

Piranha 3-DD can anyone can tell me why it is called that.After ravaging Lake Victoria, a killer swarm of piranha set their sites on a popular water park. Okay is this movie good or Bad well I can say that this movie was so terrible. the visual effects are terrible and the acting is awful.

I had a great deal of fun with the first Piranha 3D and I like the exploitation style films that Gulager has directed before (Feast 1-3), but this movie just sucked. It's nothing but a series of tasteless, severely ludicrous sexual and/or gory gags. And most of them are not funny. The whole movie comes off as sleazy and that's why I couldn't have any fun with it. Though, I did shamelessly laugh a few times and being slightly drunk may have eased the experience, this is still a bad flick and I don't recommend that anyone sober see it.

One has to question of Rhames and Lloyds decision in being part of this filth. Celebrity cameos doesn't usually work. Loads of ludicrous scenes: A girl prays before making love, a fat guy humps a pool, a sleazy cop, a piranha breaking wood and steel but is trapped in a glass aquarium, a girl still survives even when a piranha swims in her internal organs and out of her private part. Opening sequence is similar to an MTV video with girls prancing, a part-owner of a resort promotes an adult pool with naked strippers, a few scenes to prove this film promotes to horny guys that dig girls, mindless swearing and senseless violence. Acting was horrendous and the idea of "dying a virgin" was just plain stupid which also lacked character development. Even the sex scenes were laughable, and …

Worst 8 of 2012 by Stoney McStonerson

No posts have been made on this movie yet. Be the first to start talking about Piranha 3DD!