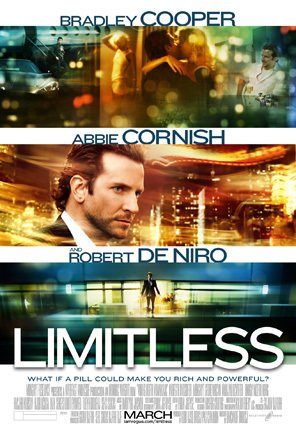 Plot: A man thinks he has solved all his problems when an untested, top-secret drug makes him smarter, leading to financial and social success. But he never considered the side effects or the people who want to keep the drug to remain a secret. -- Chris Kavan

They should just rename Limitless into Wish-fulfillment: The Movie! And itâs a fast paced high concept thriller that mostly delivers. Bradley Cooper displays the wit and charm that made him a capable leading man later in his career.

Eddie Morra: "I was blind but now I see". The story is about man thinks he has solved all his problems when an untested, top-secret drug makes him smarter, leading to financial and social success. But he never considered the side effects or the people who want to keep the drug to remain a secret. A good visual popcorn movie with it's enjoyable scenes.

A really cool movie with an interesting concept, stylish editing, great cinematography, and it moves at an electrifying pace.

A down at heel writer is offered a brain-enhancing drug after a chance encounter which seems to be the answer to all his problems, but soon he begins to encounter some adverse side effects that threaten his new life. I must admit, it's very refreshing to see a thriller that touts brain power rather than fire power as a solution to life's problems, and this stylish little indie-thriller initially intrigues with its fairly unique concept. Bradley Cooper convinces as both the directionless loser and suave sophisticate and Robert DeNiro provides some weighty support. It's a shame that when the real drama seems to appear (namely the worrying side effects to the drug and dilemma of financial success versus personal fulfilment) it's so quickly and easily glossed over in favour of a couple of …

Be Careful What You Wish For!

If you could take a pill that would make you smartâ¦ that would increase your intelligence; would you take it? And if it worked, would you want more? Is the Pope a Catholic?

Eddie is an struggling writer who has just lost his high flying girlfriend, and while he is down in the dumps, an old friend (and drug dealer) of his approaches him and offers him an experimental drug called NZT, that allows people to access 100% of their brain's power (as it is said that we, a normal human use only 20% of his/her brain power.) However the problem is not so much the drug but the supply as it always is. The new wonder drug completely transforms Eddie's life opening up a world of achievement, greed, and danger that is limitless. His life is back on track as he gets his girlfriend Lindy back and is …

As I sit down to write this, I just noted that âLimitlessâ was #1 at the box office this past weekend. If youâre one of those who took this in already and thought this movie was all that and a bag of popcorn, you probably donât want to read my take on it. I promise not to be offended if you just close this web page right now. For me, this was just another example of someone taking a great concept and making a just so-so film out of it.

Bradley Cooper (âThe A-Teamâ and âThe Hangoverâ) plays Eddie Morra, a struggling, wanna-be writer who is slowly losing his grip on any chance of success â at anything. Through total serendipity, heâs introduced to a magic pill that supposedly allows one to access 100% of his (or her) brain. Cooperâs performance here is just OK. I …

No posts have been made on this movie yet. Be the first to start talking about Limitless!