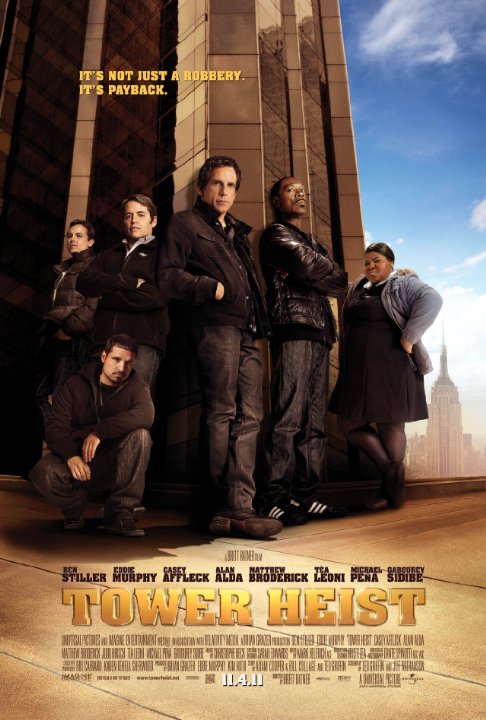 Plot: A group of working-class men all fall victim to the same ponzi scheme. They conspire to pull off a robbery of the high-rise of the man responsible for their predicament. -- Chris Kavan

"Tower Heist" had the star talent, but it failed to deliver any interesting action or memorable laughs.

A group of working-class men all fall victim to the same ponzi scheme. They conspire to pull off a robbery of the high-rise of the man responsible for their predicament. This movie was not funny and that red car in the film looks like the same car from Ferris bueller's day off.

Tower Heist borrows heavily from other (and better) films such as Ocean's Eleven and The Italian Job, but with a great cast and a solid script, this film makes for a very entertaining and satisfying experience.

After leading some campy offerings such as âA Night At The Museumâ, âTropic Thunderâ, and âThe Fockersâ series, one would expect that with Ben Stiller, âTower Heistâ would be just more of the same. Surprisingly, though, this film attempts to play it straight and serves the comedy up as only a side dish. Director Brett Ratner (all three âRush Hourâ films) is no stranger to action comedy, and he seems to demonstrate some seasoning and restraint with this effort.

Based around a fictional apartment high-rise in the heart of New York City, the story centers on Stillerâs character, Josh Kovacs, who is the no-nonsense building manager. The buildingâs star tenant, Arthur Shaw (an excellent performance by Alan Alda who quickly earns the audienceâs scorn), is a …

Remember the days when a movie with Eddie Murphy in it was guaranteed to be hysterical? I know, it's been awhile. Aside from his 'Beverly Hills Cop' days, I feel safe saying that the last thing he was in that made me really laugh out loud was "Shrek"---there are a lot of "Donkey" quotes going on in my house, especially when someone mentions waffles or parfaits. Sadly, that little gem was followed by 'Daddy Day Care', and more disturbingly, 'Norbit', which I still haven't quite forgiven him for. I know he redeemed himself slightly in his 'Dreamgirls' role, but MY dream has been to see him get back to business and make me laugh. Well, welcome back Mr. Murphy---it's nice to see you again.

THE GOOD: The movie 'Tower Heist' is kind of like a modern day Robin Hood, only instead of taking …

No posts have been made on this movie yet. Be the first to start talking about Tower Heist!