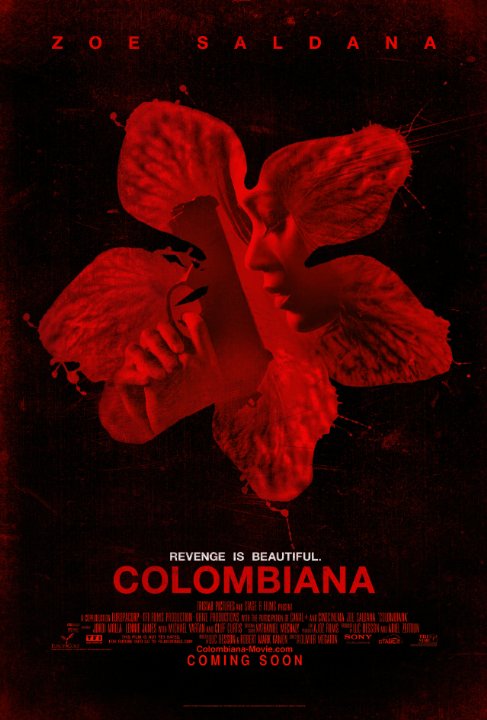 Plot: After witnessing her parents murder as a young child, Bogota resident Cataleya Restrepo's life is changed and she grows up to be an assassin. While she takes jobs from her uncle by day, at night she works as a vigilante, with the ultimate goal of tracking down, and killing, the people responsible for her parents' death. -- Chris Kavan

In the action film Colombiana, Zoe Saldana plays Cataleya, a young woman who has grown up to be an assassin after witnessing the murder of her parents as a child. Turning herself into a professional killer and working for her uncle, she remains focused on her ultimate goal: to hunt down and get revenge on the mobster responsible for her parents' deaths. This movie was directed by the worst action director that you will ever see in your life, because the action at parts was all over the place but Zoe Saldana was good in the movie.

Zoe Saldana has some action chops, but the film is simply hampered by a PG-13 rating. For a movie this violent, it feels a bit... weak. Plus the whole revenge thing has been done ad nausea before. Still, for an action fix, it does the trick, just don't expect it to stick with you.

The young daughter of a cartel enforcer is orphaned when her parents are murdered by his former boss and seeks sanctuary in the US where she grows to become an assassin sworn to avenge them. Luc Besson rehashes the formula of Nikita in this flashy but generic action thriller in his trademark style. He is joined by his co-writer of Taken and it shares the rather humourless approach, but the addition of some mainstream audience pleasing sentimentality in the form of a romantic interest and murdered family means it is rather less edgy and offbeat. Thanks to some glossy and well engineered set pieces, one of which is clearly influenced by Besson's classic Leon, Colombiana is always entertaining but it lacks the imagination and invention of his best films. Not bad at all, but it's not quite …

COLUMBIANA tells the story of 9 year old Cataleya, who after witnessing the cold-blooded murder of her parents by a rival drug cartel boss vows to reap revenge on their killers. She takes refuge with her uncle in California and asks him to "educate" her in the ways of the mob. Flash forward 15 years later and Cataleya is a full blown assassin, working as a hit woman during the day and seeking out her parentsâ killers by night. When Cataleya isn't dodging the bad guys, she must keep a step ahead of a tenacious FBI agent, Ross (Lennie James) who starts to notice a pattern in the murders.

Through a series of innovative disguises and escapes Cataleya continues to murder, falls in love with artist Danny (MIchael Vartan), Of course Danny has no clue about her line of work, until he …

No posts have been made on this movie yet. Be the first to start talking about Colombiana!