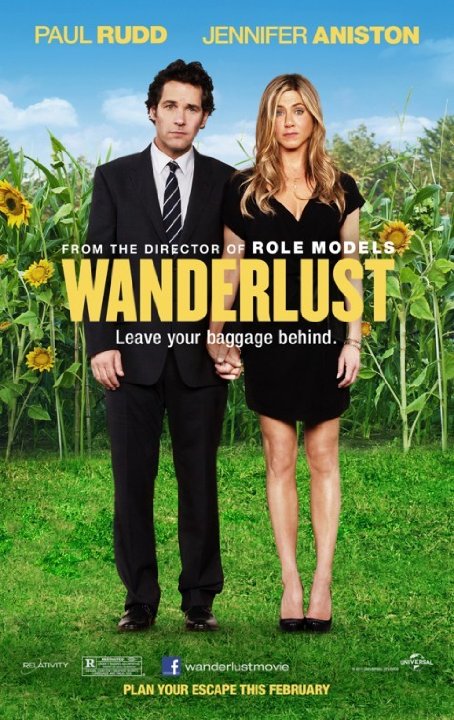 Plot: A high-stressed Manhattan couple find time to relax after joining the laid-back community of Elysium. But this free-wheeling lifestyle may cause more problems than is solves. -- Chris Kavan

I personally liked this. I enjoy Jennifer Aniston and Paul Rudd and they carry the film nicely. The commune bits were cliched, but the supporting cast has a lot of fun in their roles, making those moments and the film as a whole a very entertaining experience. You'll see a lot of dick, but overall this is a good comedy that is funny throughout.

It's a very funny movie. But, the plot is a little lacking, in my opinion. The jokes are funny though. They mostly make fun of hippies, and unlike many movies made in this genre, I don't think there were any racist or sexist jokes. So, all in all, not too bad.

Sorry to say but I didn't make it to the end of the movie. This one is like some horror movie with bad players and a bad storyline but than even worse.... I had high hopes after looking at the trailer but these hopes were gone in 60 seconds... (now thats a movie!).

Better then i thought!!

Had heard that this was surprisingly to alot of people very funny. So i decided to have a watch and see for myself last night. Was a lot better then i originally suspected it would be although my expectations for this film were not very high. Jen Aniston film's do not draw me in however i love Paul Rudd and he did his job during this. Is it just me or does Paul Rudd have a hardline direct to my funnybone as i find the actor hilarious? Rudd and Aniston play newly married couple George and Linda who after bascially losing everything minus their shirts in the big apple after George loses his job, they are forced to move to Atlanta, Ga. and move in with George's braggart of a brother (He has made quite a sucess out of his life in the selling of outhouses to construction companies) On their …

I wanted to like this movie and I did like large portions of it. Ultimately, it's a plotless meandering (not unlike the characters it portrays) that focuses more on its individual jokes than creating a cohesive comedy that flows. The unevenness of the film is helped a little by the talented cast, who all go for broke, uttering some of the script's more ridiculous lines with comedic energy that works, for the most part. Justin Theroux is a standout and a lot of the supporting and smaller roles are populated by talented comedians that make the most of the material (frequent Wain collaborators Michael Ian Black and Michael Showalter have some pretty funny cameos.) That said, in the hands of a better director the material could have really worked. David Wain, who I think is way better …

No posts have been made on this movie yet. Be the first to start talking about Wanderlust!