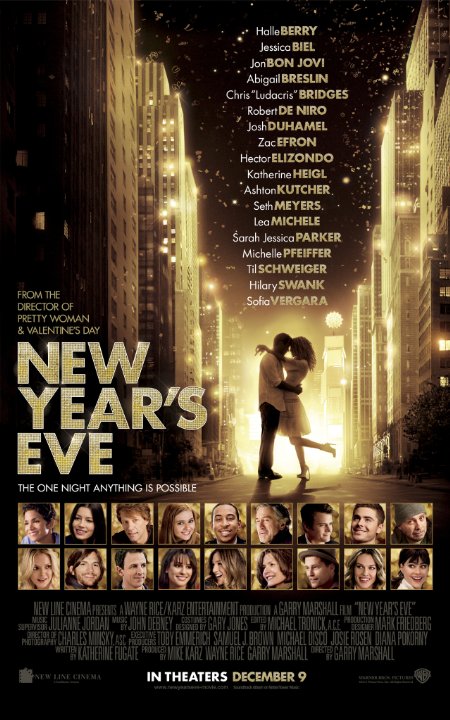 The story is about a diverse group of people find their lives intertwined on New Year's Eve in New York City. Wow just wow, How can a movie like this be made because this movie is just a waste of time to the viewers. The characters are shallow and a old tree has more character then there's people. the directing is horrible and the cast are all wasted.

Just a bunch of well known actors crumpled up in a bad movie with a horrible plot.

This is a horrible film, devoid of life, plot, charm, and humor. It's a textbook example of having too many characters; there are so many familiar faces packed into this film that it becomes impossible to both follow and care about any of them. The film's attempts at intersecting storylines become too coincidental and, simply put, there are just too many storylines going on for the audience to invest in any of them.

The Star-Studded cast alone makes this movie worth seeing and the focus was New York City which I loved!

The best place to start is with Michelle Pfeiffer's dowdy character, who decides to quit her job and experience different things. She enlists the help of a courier named Paul (Zac Efron) to help her complete her New Yearâs resolutions by midnight in exchange for exclusive tickets for a special party. Meanwhile Paulâs best friend is New Yorker Randy (Ashton Kutcher) who could care less about all the hype of New Yearâs Eve. He gets stuck on the elevator with his new neighbor Elise (Glee's Lea Michele) who is the back-up singer a music superstar named Jensen (Jon Bon Jovi). Jensen is trying to win back the love of his life, a professional caterer named Laura (Katherine Heigl) …

Occasionally, when my cupboards are a little bare and I havenât had the chance to get to the grocery store, I will rummage through my refrigerator and try to come up with a creative masterpiece to put in front of my family for dinner. Thatâs kind of the premise behind the movie âNew Yearâs Eveâ, the latest concoction of director Gary Marshall. Iâm not saying itâs unfit for consumption, but the chance of anyone wanting seconds is going to be rather small.

THE GOOD: If you happened to catch Mr. Marshallâs production of âValentineâs Dayâ from last year, you may be aware that there seems to be a trend happening here: Place as many big name stars in one film and name it after a beloved Holiday. That pretty much sums up both of the plot lines, because, there really …

No posts have been made on this movie yet. Be the first to start talking about New Year's Eve!