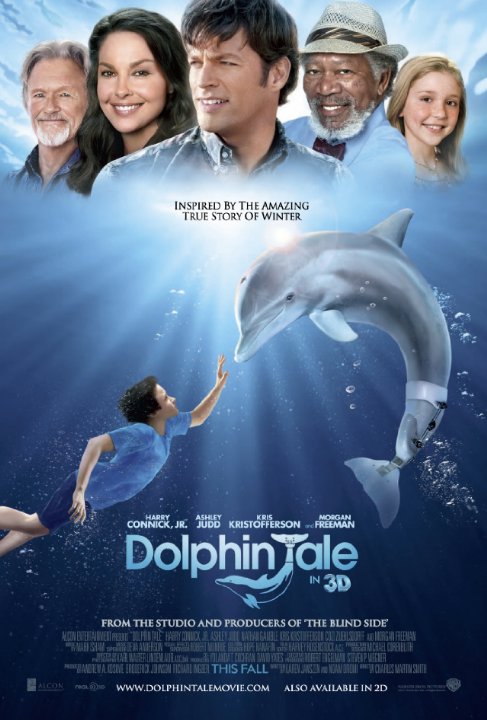 Plot: A boy bonds with a dolphin who loses its tail after being caught in a crab trap. -- Chris Kavan

Dr. Cameron McCarthy: "Just because you're hurt doesn't mean you're broken". Dolphin Tale is about a boy bonds with a dolphin who loses its tail after being caught in a crab trap. This movie was a harmless family flick with cute dolphins. People say that this is a copy and paste from free willy, but this is thing, I didn't like free willy at all, but I think this movie has a stronger message and it has better charterers. This is a harmless movie that little kids can enjoy and parents can find something good in this.

It seems the dolphin was more of a star than the artists involved with the exception of Morgan Freeman. Judd and Harry Connick Jr.'s talents were wasted on a family flick. As mentioned by others, too cheesy and obviously fabricated for better entertainment. This reviewer felt the direction tried to impress the audiences with its technical aspects (especially the designing stages of the missing part). Had some moments of a good film but certain parts were a drag.

Being a Clearwater, FL native and growing up 15min from where this film was shot, I was praying and hoping this would be a good movie. IT WAS TRASH!!! I cant believe this was a big screen movie. This belongs on the shelves of the Clearwater Aquarium gift shop, not for the whole nation to see. Clearwater is amazing everybody. We have the cleanest beaches with the best sand in all of Florida. One of the only locations not littered with condos and hotels. And I swear we are not as cheesy and fake as this movie. BURN IT!!!! BURN IT!!!!! Send it to Hell!!!!!

Can You Say "Cheese"?

For a film that's supposed to be based off a true story, the whole film feels as fake as the many prosthetic tales made for the star of the film; a dolphin named Winter.

The movie is about a young boy named Sawyer, who is very anti-social, and not doing very well in Summer school. One day, he finds a beached dolphin entangled in a rope and a crab trap. The boy immediately has feelings for the dolphin, and stops by the marine animals hospital everyday to check on the creature. It appears there is little hope for the dolphin to survive, do the dolphin's tale (or more specifically; lack of).

Among many problems with this film, the biggest is the movie's lack of a reason to exist. The story has obviously been greatly fabricated from it's source, the acting is passible, the attempts …

It's a wonderful thing, albeit rare, when Hollywood decides to make a movie that takes a real life event and turns it into 113 minutes of entertainment for the whole family. Knowing ahead of time how much my daughter and I both love dolphins, and how much of a sucker I am for a "makes you cry-but in a GOOD way" type of film, I had high hopes for this one. Let me tell you what they got right---and where they should have stepped away.

THE GOOD: The movie is based on a true story of 'Winter', a young dolphin who becomes tangled in a fishing net, causing irreversible damage to her tail. On his way to school, Sawyer (played by Nathan Gamble) sees her stranded on the shore and with his help, frees her from the ropes and assists with the local marine hospital in coming to her rescue. Sawyer …

No posts have been made on this movie yet. Be the first to start talking about Dolphin Tale !