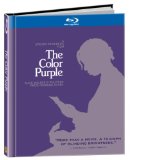 Plot: The story of a young black women's entire life - including hardships and the things that made her happy.

Powerful and unforgettable, "The Color Purple" is a strong portrait of black feminism led with great performances.

I'm not sure why a movie about a black woman was directed by a white man.

One of Spielberg's films I never really got into. A decent story and some good actors.

An extensive picture involving symbolism's for religion (mention of God), pain (purple color from bruises), equality, positivity (Shugâs character), family (Nettieâs character), maturity (Sofiaâs character) and cruelty (Millie and Albertâs character). The locations were really well planned and scenic. Performances from Oprah Winfrey and Whoopi Goldberg brought mesmerizing and emotional performances. The pace though however suffers at times due to a few dragging scenes and side stories.

Screenplay was good if only edited to only keep the essential parts related to the main figure. A few good lines from Shug - âEverything want to be loved.â and âYou must look at all the good and acknowledge them because God placed them all on earth.â The Color Purple maybe …

No posts have been made on this movie yet. Be the first to start talking about The Color Purple!