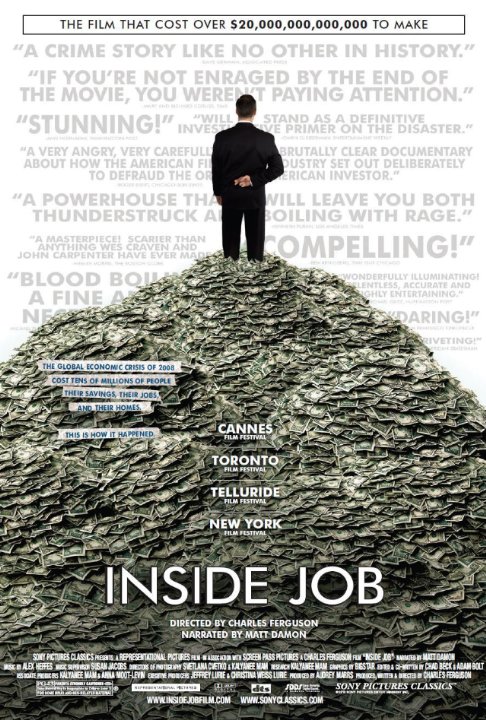 Plot: Documentary that examines the factors and fault that led to the recent financial meltdown. -- Chris Kavan

Matt Damon narrates Charles Ferguson's documentary about how deregulation of the finance sector allowed corporate greed to cause the global financial crisis of 2008. And those responsible were not only not brought into account for their actions but most of them still hold key positions in Obama's administration and in the private finance sector. Very chilling indeed!

This is one of the best documentaries I've ever seen. It made me angry, sad, depressed, and I felt betrayed by by my government and those that are entrusted with my money and your money. This movie targets everyone and backs it up with evidence. Bankers, lawyers, stockbrokers, politicians, intellectuals, professors, economists, Republicans, Democrats, and every president from Reagan to Obama are all to blame for the Great Recession at some point. Never did I feel more galvanized and enlightened before after watching a documentary. This should be required viewing material in every school and town hall across America.

A must see for anyone wanting (and you should) to understand our current financial situation/meltdown and how it has come to pass through many administrations, not just our present one. It is told in a balanced, fair manner that lays blame at both parties feet. This movie would make a great black comedy fiction piece.......too bad for most of us its not fiction

A documentary about the 2008 Economic Crisis where millions of people lost their jobs and savings. Sept. 2008 finance took over Iceland, caused by 3 banks, stock prices and household products went up. Itâs broken down into 5 parts. Part I â How we got here? Part II â The Bubble Part III â The Crisis Part IV â Accountability Part V â Where we are now. Wallstreet people got rich, deregulation, Keating, big investment banks were discussed in the first part. In the 2nd, the huge profits, bonuses and paychecks of the executives, lack of investigation during the bubble, Goldman Sachs and loans were divulged. For the crisis portion, it showed FBI, IMF warnings, Lehman Bros., GM and Meryll Lynch downfall, 10% unemployment rate and more. CEOâs allowing to resign with severance …

To See: Business Movies by Alex

No posts have been made on this movie yet. Be the first to start talking about Inside Job!